Beloved Syria aims to do more than reveal the beauty of Syria, the depth of its history and culture, and the renown graciousness of its people.

It is hoped, among other things, Beloved Syria can stimulate conversations about identity.

Syrians express an extraordinary love for Syria. What leads people from diverse faith and ethnic backgrounds to feel a sense of unity in their love for ‘country’?

The depth of their affection suggests their links to the land, its ancient history and expressions of culture are akin to those felt by indigenous peoples for ‘country’.

Such affection may seem baffling to ‘modern’ peoples elsewhere.

’Syrians’ have suffered occupations and wars for millennia and, like past wars, this century’s has inflicted immeasurable suffering and caused enormous destruction.

Foreign invasions and war can create new threads to a country’s history and identity, not all of them are necessarily negative. In the case of Syria today, the unbounded strength of its women has become a new feature of the country.

Beloved Syria aims to give a respectful voice to the people of Syria as they focus on uniting and rebuilding their country. Women’s voices will naturally dominate.

As peace gradually settles in Syrian cities and tourists return to that country, it becomes possible for Beloved Syria to present a more current and nuanced picture of Syria and its people.

We trust that readers – together with the Beloved Syria‘s editorial team – may develop a serendipitous understanding of much more than Syria.

A lot of people, both in Syria and Australia, have enabled us to produce the magazine – the hard copies, this website and the social media pages. 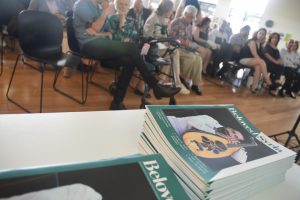 We are especially grateful to the Syrians and non-Syrians who responded (and still respond) so positively to our requests to present them in Beloved Syria.

AMES Australia (at Flagstaff) brought together the teams which produced the two hard copies of Beloved Syria in 2016 and 2017. It was mostly women who met at AMES, in the classroom and in the office, who made up the editorial teams. As more Syrians on humanitarian visas joined the AMES classrooms, so Syrians in Australia had a larger voice in the production of the magazine.

The team which produced the first hard copy of Beloved Syria in 2016 was very small: Susan Dirgham, Norma Medawar, and graphic designer Krisztina Strzebonski. However, there would be no Beloved Syria without the support and encouragement of friends, family and acquaintances along the way.

For its production and printing, the 2017 issue of Beloved Syria depended on crowd funding and the commitment of a much larger team of volunteers.

As Kris Strzebonski did with the first issue of the magazine, graphic designer Norisa Khamisi contributed to the success of the second issue of Beloved Syria, while the Beloved Syria website continues to rely on the expertise and generosity of Programmer & Web Administrator Youngdeok (Sean) Hwang.

‘Through love and learning, working for a united and peaceful world’ is the magazine’s mission statement.

We welcome your feedback.

Photographers
Jacqueline Mitelman, Susan Dirgham, and other images under Standard License from Shutterstock

For more information on Beloved Syria or if you are interested in obtaining hard copies of the Beloved Syria magazines please email us directly at: