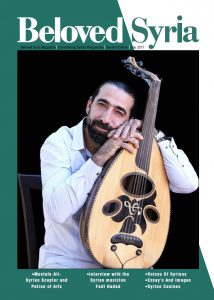 Beloved Syria aims to do more than reveal the beauty of Syria, the depth of its history and culture, and the renown graciousness of its people.

Syrians express a great love for their country, a deep affection that indicates their links to the land and its ancient history. We hope the magazine can stimulate conversations about identity and attachment to the country. What leads people from diverse faith and ethnic backgrounds to feel a sense of unity, one that is charitable?

Since their country connects continents, ‘Syrians’ have suffered occupations and wars for millennia.  Many of us would have distant ancestors that passed through the land we now call Syria.

‘There is a great danger when presented daily with the tragic, incomprehensible events in Syria ? the appalling destruction thrust upon the Syrian people and their culture ? that we become anaesthetised to the suffering. This timely magazine reminds us all that Syria and her people are not just the crumpled buildings and desolation we see nightly on television, but an ancient culture demanding our respect and support through a very dark moment in its history. ‘

‘This beautifully presented magazine exudes a sense of calm that’s so welcome. To hear Syrians’ own voices is a balm, bringing back their generosity, vivacity, and focus on humanity ahead of all other things. Their voices are a timely reminder that these conflicts grossly insult and demean us all.’