A Syrian refugee granted asylum in Melbourne has started a magazine to give Australians a different perspective of her homeland, which has been ravaged by years of war.

Syria was once a nation of 22 million people and home to historic sites that predate the bible.

But now the UN estimates nearly 11 million have fled their homes after years of bloody civil war and millions inside the country remain in urgent need of aid.

After living in Melbourne for several months, Norma Medewar — a tour guide in Syria before the war — realised Australians knew very little about her country.

With the support of AMES, an education centre for adult migrants, Ms Medewar started a magazine about her homeland called Beloved Syria.

“There are two aims. To give Australians a view of Syrians, what we look like, what we believe, and that we are similar,” she said.

“I hope this project is successful, and I wish we can show the real image of Syria over the world.”

Ms Medewar saw the horrors of the Syrian war first hand — her uncle was kidnapped in 2012 and her cousin killed.

Her brother-in-law, Jack Dawli, also came close to being executed after militant rebels looking for government supporters pulled over the bus he was travelling on near Aleppo.

‘Thank you people of Australia’

Mr Dawli and Ms Medewar fled Syria 18 months ago with Mr Dawli’s wife and his daughter. The family has been resettled in Melbourne.

Australia has promised to take 12,000 Syrian refugees on top of its annual asylum seeker intake because of the crisis.

But while they are safe, seeing the ongoing daily destruction of their homeland on the news is heartbreaking for Mr Dawli and Ms Medewar.

“We want to see Syria after the war. We want Syria to be reunited as it was before. Syrian Christians, Muslims and other faiths to be united as before,” Ms Medewar said.

The first issue took seven months to make and features contributions from Syrians still inside the country and those that have left.

It consists of poems, pictures and stories about life and culture in the country to keep the culture alive amongst the Syrian diaspora and perhaps give the community a blueprint for the future.

Ms Medewar said Australians and Syrians were not too different. 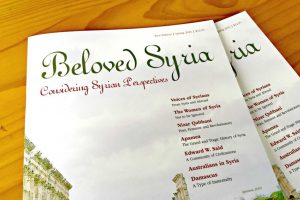 “I hope to also wake up one day … and the war is over and I can organise trips for Australians to visit Syria,” she said.

One of the people Norma will have to educate about Syrian culture is her new nephew Leo, Mr Dawli’s son.

Leo was born in Australia and his generation will be the key to rebuilding Syria when peace finally comes.

But until that day comes, Mr Dawli said Australia was home and his main wish was to be able to pay Australia back for everything it had done for him.

A Syrian Millennial’s Eulogy To The Bad Times And Good