– By Greta Medawar and Carissa Gilham

In May 2017, Shaam Group presented the inaugural Shaam Syrian Film Festival in Melbourne and Sydney with the objective of providing a platform for Syrian cinema to be screened in Australia. Sponsors of the festival included Melbourne travel agency, CedarJet Travel, and popular Sydney based Knafeh Bakery that specialises in Jerusalem street food. The official media partner was El-Telegraph, Australia’s longest running Arabic news publication.

The Festival featured three films, Mariam, The Father, and Syrians, all directed by Basil Alkhatib, a Syrian movie and TV director with a Palestinian heritage, who won the best director award for the movie Syrians at the 2016 Alexandria Film Festival in Egypt. Basil Alkhatib and actresses Sabah Jazairi, Dima Kandalaft and Maysoun Abou Assad made the journey from Syria to Australia especially for the festival.

In a report featuring the director and actresses on ABC TV’s Lateline (5 May 2017), Dima Kandalaft said,

Beloved Syria editors were invited to a media conference hosted by the Australia Arab Chamber of Commerce and Industry on 4th May after the screening of the three movies in Melbourne. The conference provided an opportunity for the filmmaker and leading ladies of the movies to present their account of how people have responded to the war since the civil conflict began in 2011. Below are responses to questions put forward at the Media Conference, mostly by the Beloved Syria team.

Q: The characters in the films go on a journey through the crisis they face. What personal journeys have you gone on since the war started? 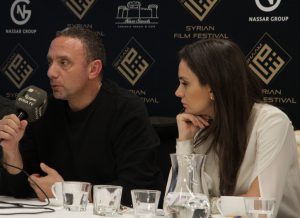 Basil Alkhatib: I believe when a country faces such a war like the war we are facing in Syria, there could be only one aspect of victory and it is when every citizen in this country considers that this war is his personal war. From this point I, as a film director, consider that I have to participate in this war in my own way with my own weapons, which are the films, the camera, the scripts… etc. That’s why I believe, when everyone of us… I, as a director, Dima, Sabah and Maisoon as film actors, everyone is doing his part, I think this could make a step towards victory against terrorism.

Making films in Syria all these years has been extremely dangerous and extremely difficult. When people ask me what difficulties do you face? I simply answer them, there is no difficulty other than the matter of staying alive. Every day we go to the film location and frankly we do not know if we will go back alive or not. But we all believe in what we are doing and I think that this is the most important thing in these films, that we believe in ourselves, we believe in our country and we believe that we are human beings and we have the right to tell to the whole world about the suffering of the Syrian people. The three films, in spite of their differences, are talking about the suffering of the Syrian people. 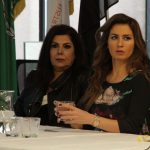 Maysoun Abou Assad: We need to show the world that there is more to Syria than refugees. These films demonstrate the strength and resilience of the human spirit and the human ability to overcome danger. We hope it gives the Australian people a chance to learn more about Syrian culture.

Q: Syria and Iraq have gone through a similar crisis, first with the Iraqi war and now the Syrian war. The cinema industry in Iraq collapsed, while in Syria the cinema industry kept going and did not stop a day. So, Mr. Al Khatib, how could you make long feature films in these circumstances, because normally making such films needs a quiet and peaceful environment?

Basil Alkhatib: I always believe that working under pressure gives good results. When you are under pressure, when you are facing danger, I think you can get what you want most of the time. The film The Father is based on a true story that took place in Syria at the beginning of the war. I did a lot of research and I met the people who were under siege in this area. Some of them survived, others have passed away. The whole script was built upon the testament of what they witnessed. That’s why I believe that documentary film is very essential but I still believe that the feature film at this time and place is much more powerful and has the ability to reach people and affect them.

Q: What is the message you want your films to tell the Australian people and the Syrians who have lived in Australia for a long time?

Dima Kandafaft: This question has two parts. For the first part of the question, which is what is the message we want to deliver for Australians; it is that we want to deliver the message for the whole world, for every culture and for every country. So it is not something limited by a period of time. And everybody wants to get to know everyone and get to have a good idea of their culture and how they live. From the TV screen, you do not always get the right idea. So being here, you get to contact the people more. And the movie is always the best way, I think, to show people what kind of a human you are. And then the second part; actually it was very hard and the four or five days were filled with a lot of emotions, because the Syrian people who have lived here for a long time, they had a really unexpected feeling. They really love and respect Australia and consider it as their home. But they still feel nostalgic for their motherland Syria and they still are very connected to it. From the minute they saw us, they showed a lot of lovely emotions so I cried a lot and I am so proud of the Syrians living here who are still connected to their land. And I believe when someone loves and respects his homeland, he respects any country he lives in. So, my message is do not be afraid and you don’t have to have fear for Syria because we are there and there are a lot of people in Syria who are working and protecting Syria.

Q: What do you believe can unite Syrians at the moment to regain their country?

Basil Alkhatib: Well it is very complicated. I believe that faith in a good future will save us all. The situation in Syria might need decades, not years to be resolved, yet we believe that each one of us should do as much as they can, to do what can save us. Honesty and conscience can tell us what we have to do.