Luke Cornish is drawing on his experiences travelling through Syria to paint a picture of the country beyond the news headlines. (Aired SBS World News February 12th 2017).

Permission to publish on Beloved Syria from Brianna Roberts

Since being a teenager Luke had been inspired by the powerful images of artist George Gittoes, and later by the paintings of Ben Quilty. Both artists had spent time in war zones, with their work reflecting human responses to conflict, raising people’s awareness of social issues. This was what Luke wanted to do. He wanted a humanitarian trajectory for his work.

His first opportunity came in 2013 when he went to Lebanon, taking photographs that he could later use for stencils, rather than using Internet images. At that time he wanted to get to Syria but didn’t have the right paperwork. ‘I was very naïve’, he said. A chance came to go to Syria 18 months later in 2016, when he joined a charity group, taking video footage for SBS.

This visit exposed him to the confronting nature of war, but also the human side of the conflict. He wanted to reach out to the people, photographing the everyday life that still goes on. 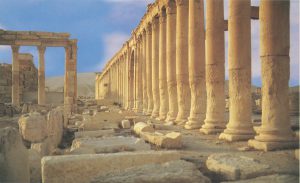 But while there he also made stencil art. Before going to Syria he had prepared stencils to make a portrait of the Syrian antiquities scholar of Palmyra, Khaled al-Assad, who was beheaded by ISIS for refusing to reveal the hiding place of ancient Syrian artifacts. Luke wanted to pay homage to the bravery of Khaled al-Assad and stenciled his portrait on the door of the 2000 year-old amphitheater in Palmyra, before much of the ancient city was destroyed by ISIS.