On a bright spring day in April 2013, the minaret of one of the world’s most famous mosques came crashing to earth in the Syrian city of Aleppo. The sound was heard across the Old Quarter, even over the din of artillery and rattle of gunfire.

The Great Mosque of Aleppo had stood since the 12th century as a symbol of the city, on the site of an even older mosque from the Umayyad Caliphate. It had survived wars, fires, and earthquakes. Five times a day, for 919 years, the Muslim call to prayer had issued from the minaret, which overlooked a courtyard that covered almost an acre. The United Nations cultural agency, UNESCO, had pleaded for the mosque’s protection.

The precise cause of the collapse is not known, but the mosque had been seized by anti-government forces early that year, and it was in an area of heavy fighting. The regime of Syrian president Bashar al-Assad claimed that fighters from the Jabhat al-Nusra group, which was linked to al-Qaeda, had detonated explosives inside the minaret. Rebels claimed it was destroyed by tank fire from the Syrian Army.

Today, the Great Mosque’s minaret lies in more than 2,000 pieces of pale limestone. They litter the rectangular courtyard, obscuring its great expanse of black, white, and yellow geometrical paving. The loss of the minaret was a blow to the entire nation’s cultural heritage—and it was followed, just two years later, by the deliberate destruction of Palmyra’s temples by the Islamic State. And yet amidst all the rubble, a group of Syrians is trying to bring the Great Mosque back. 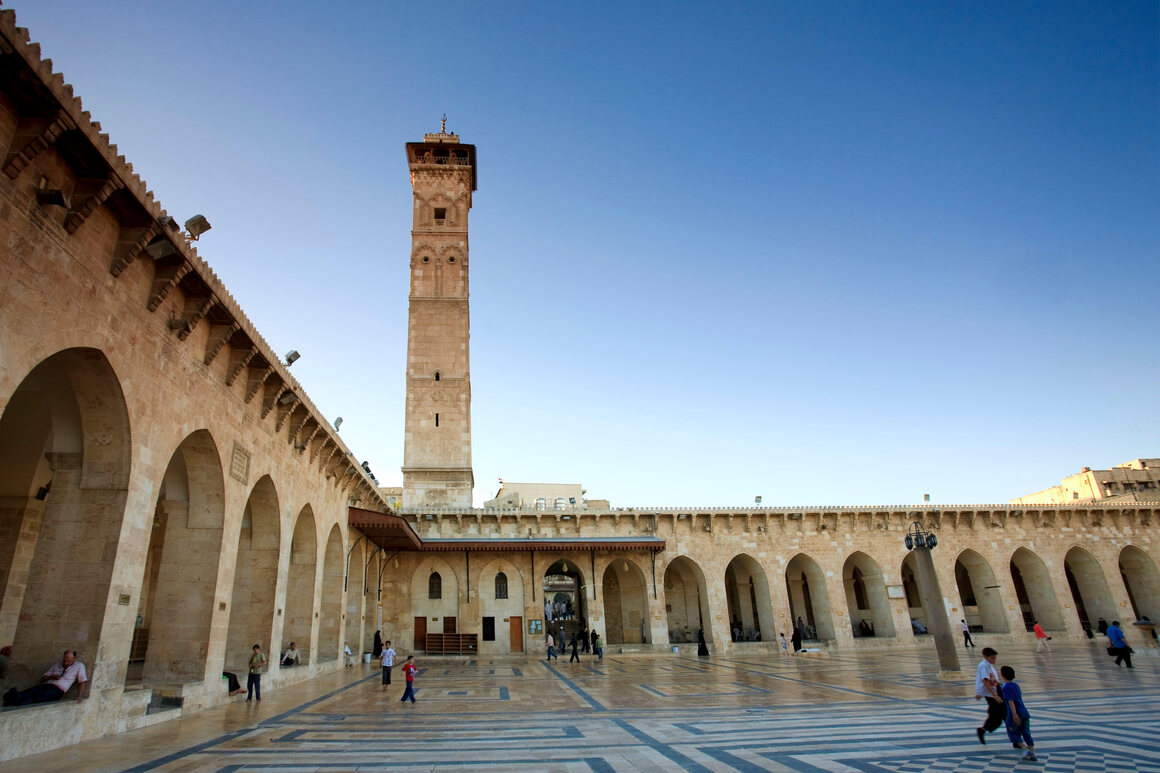 During 2013 fighting between Syrian rebels and the Assad regime, the Great Mosque’s historic minaret, shown here in 2009, was broken into thousands of pieces. JON ARNOLD IMAGES / ALAMY

A civil engineer named Tamim Kasmo, 73, has joined a team of architects and engineers, stonemasons and woodworkers who have taken on the task of rebuilding the mosque. Faithfully reconstructing this architectural masterpiece is the biggest challenge of Kasmo’s long career in heritage restoration. “An expert may spot the difference between old and new, but the general public must not,” says Kasmo, as he walks among the ruins.

Kasmo’s team must put the minaret back up and repair the broken columns, scorched ceilings, and bullet-scarred walls of the prayer hall and arcades that surround the courtyard. During a tour of the site, Kasmo says that construction techniques and materials will be matched to the originals wherever possible. “We must respect what was done over the centuries,” he says. 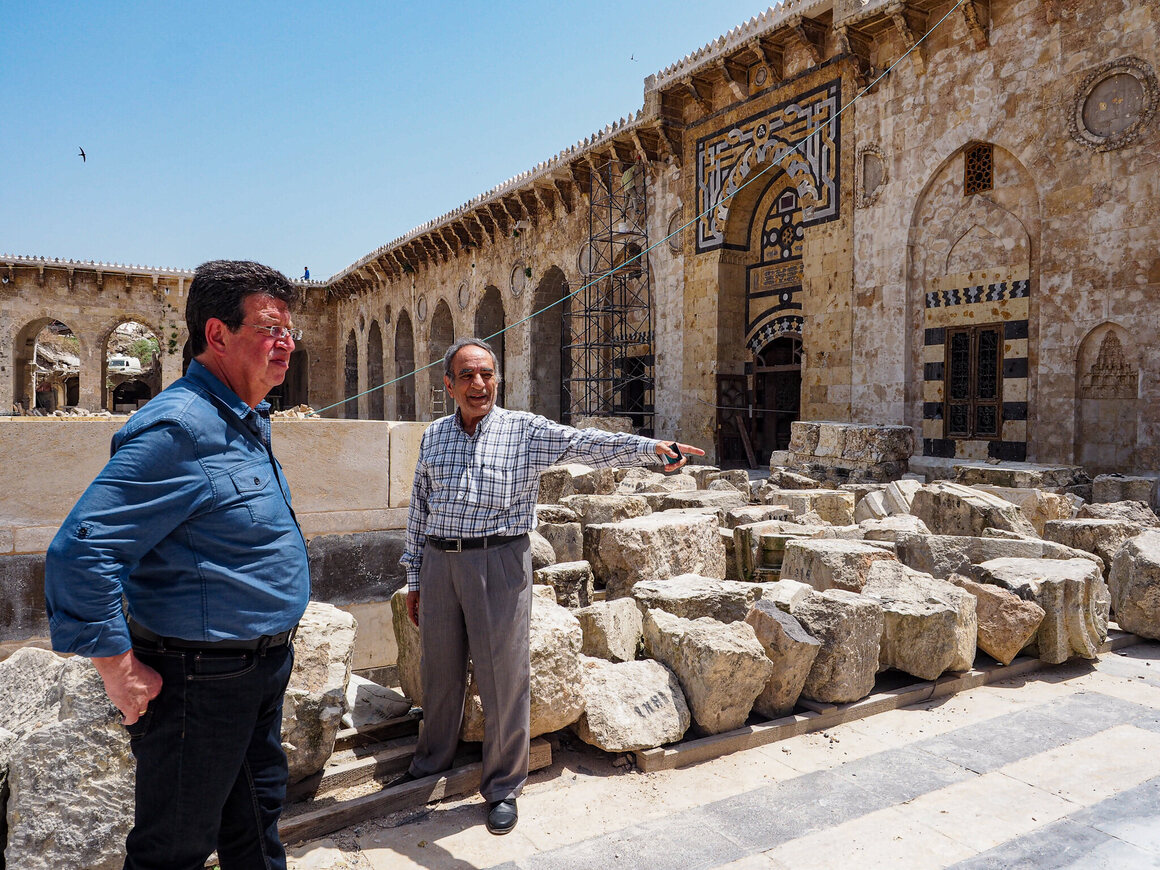 In 2011, before the country tumbled into chaos and war, Aleppo was Syria’s biggest city, with almost five million residents. Today, its population is thought to be less than half that. The Syrian Army retook the city in December 2016, and in the years that followed, more than half a million war refugees returned, according to the United Nations. Life is burdened by shortages of food, medicines, electricity, and petrol, and many Aleppans still depend on UN aid.

With reconstruction plans crippled by an all-round shortage of funds, equipment, and skilled labor, only a handful of Syria’s heritage rehabilitation projects have gone forward. The Great Mosque—which is also called the Great Umayyad Mosque, and which supposedly held the remains of Zechariah, father of John the Baptist—is the most prominent. Its project director and architect, Sakher Oulabi, calls it the national government’s “number one heritage restoration project.” He says every member of his team feels a heavy responsibility. “We all understand we are doing something very important for the soul of our city and our country.” 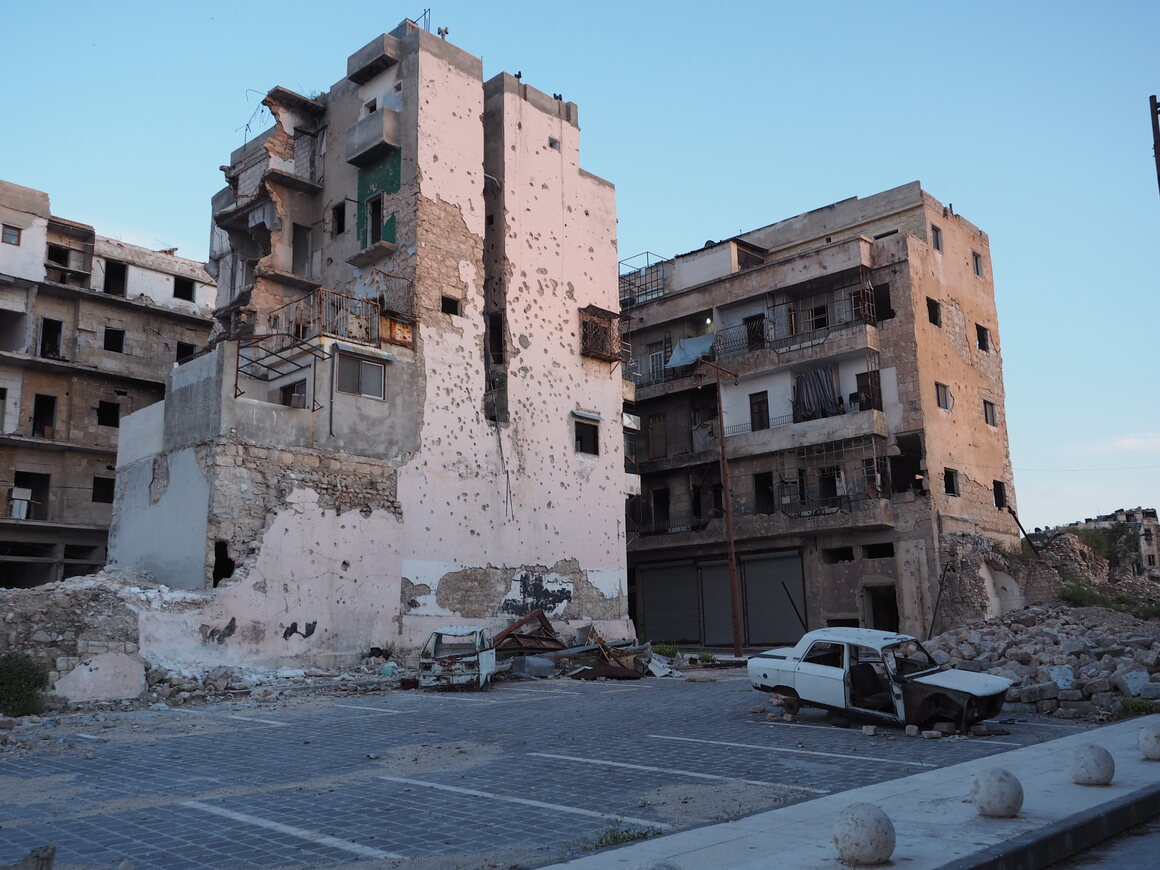 The project is funded by a charitable foundation linked to the family of Ramzan Kadyrov, the strongman ruler of Russia’s Muslim-majority republic of Chechnya. Russia has backed the Assad government against rebels and foreign fighters—including some backed by the US, other western powers, Turkey, and Gulf Arab monarchies. The mosque’s reconstruction is overseen by Syria’s Directorate General of Antiquities and Museums and the Syria Trust for Development, which is sponsored by Assad’s government.

Rebuilding the mosque would be a major contribution to the regeneration of Syrian society, says historian Ross Burns, a former Australian ambassador to Syria and the author of Aleppo, A History. “The Great Mosque is a very important symbol of Aleppo and a point of pride to all Syrians,” says Burns, whose website Monuments of Syria tracks conflict-related damage to Syria’s built heritage. He says restoration of significant Syrian monuments would create local jobs, promote skills needed for post-war reconstruction, encourage the return of refugees, and eventually boost the tourism industry. 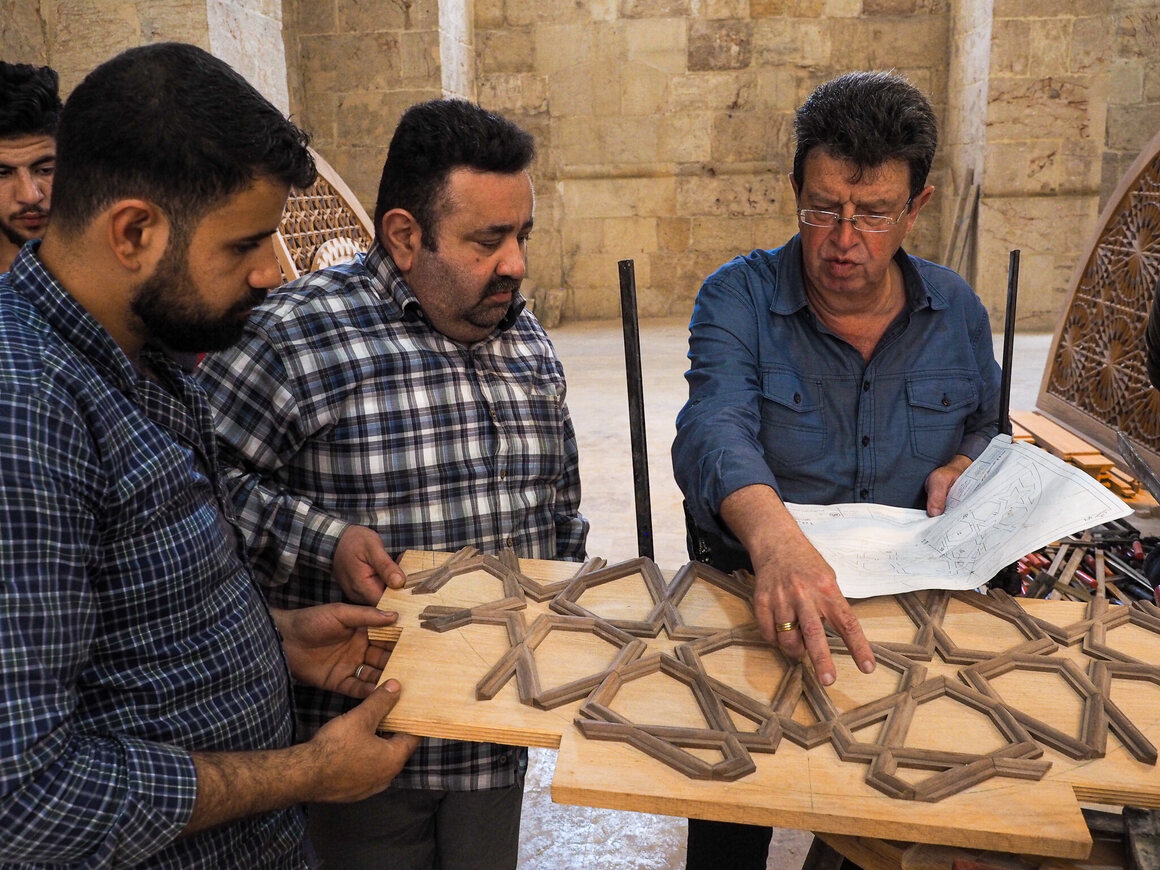 In the 1990s, Burns points out, the National Museum of Lebanon was “superbly brought back to life” in Beirut, as part of an effort to move past the country’s own civil war. “Future generations of Syrians deserve to know how splendid a past their country presented to the world,” he says. But broad international support for reconstruction of Syria’s monuments, he says, is hindered by ongoing disputes about how the conflict should be resolved. In the meantime, western archaeological institutions and experts can perhaps best assist by helping UNESCO to train Syrian heritage specialists, he suggests.

Even with funding in place, the minaret’s technical challenges are formidable. Oulabi’s workers have excavated its basement to learn how it was first erected, between 1089 and 1094. The square, double-walled structure was built of limestone blocks, connected by iron clamps and molten lead. This kept the five-story tower intact until 2013. Now, the minaret’s giant stones are being weighed and measured, strength-tested with ultrasound, and photographed from various angles so that photogrammetry—the science of making 3D models from pictures—can help to determine where they fit.

Professor Gabriele Fangi, an Italian photogrammetry expert from Marche Polytechnic University in Ancona, studied the minaret in 2010. He is one of very few western experts to have revisited the mosque since war broke out in 2011. In 2018, he gave the Syrian team his high-resolution photos of the structure, and says they intend to rebuild it “as it was before.” 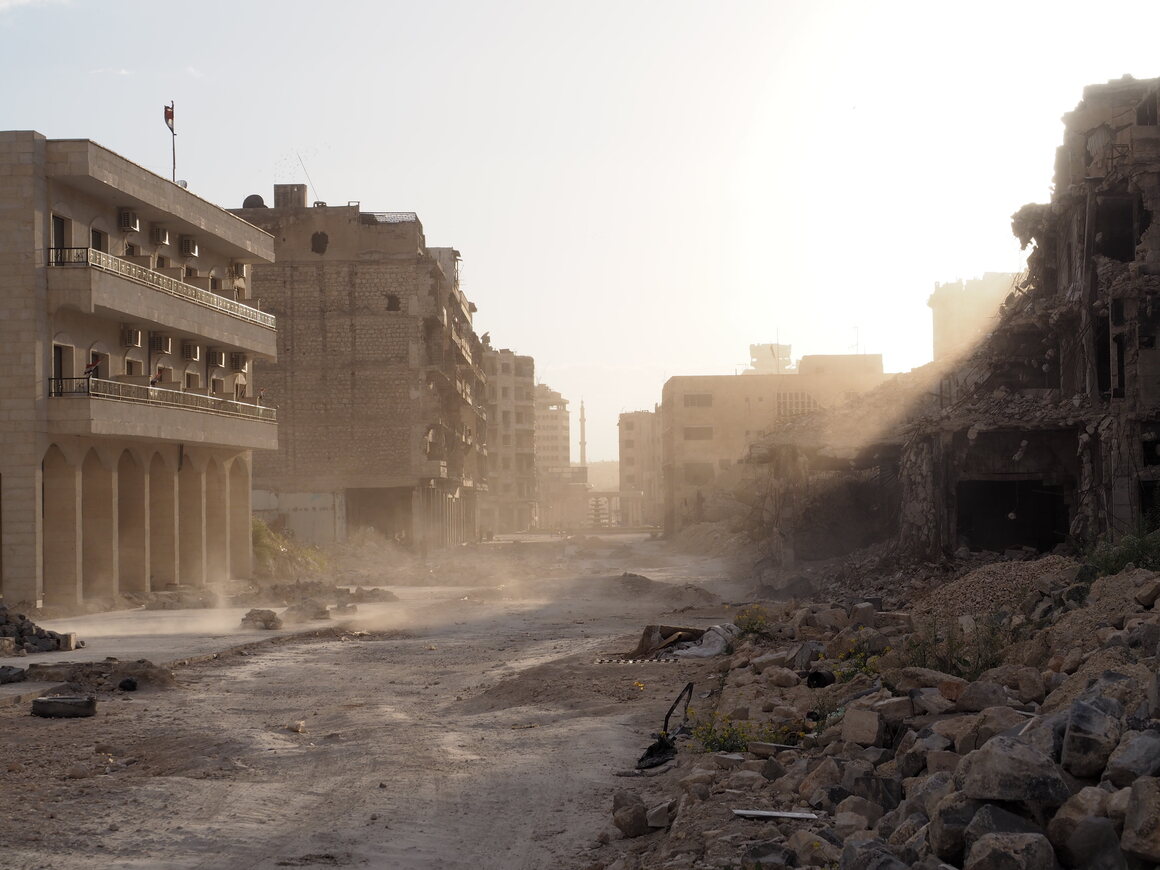 Ruined apartment blocks and signs of reconstruction near Aleppo’s Old Quarter. More than half the historic district is damaged or destroyed. ALEX RAY

Oulabi says most of the minaret’s original blocks can be reused. However, replacing the rest poses a problem: Limestone that best matches the original is in a quarry outside government control, in Idlib province. A senior official from the U.S. Defense Department, Michael Mulroy, noted in May that Idlib harbors “the largest collection of al-Qaeda affiliates in the world right now.” Oulabi’s team is searching for another site with limestone identical to the original color.

Kasmo believes the toughest challenge will be to recreate the minaret’s intricate decorations, including carved bands of Arabic calligraphy adorned with floral motifs. They told the story of the mosque’s construction, and were a window into the city’s history. “Only half the inscriptions survived the collapse, so we will have to recreate the rest from photos and other records,” he says.

Burns, the Australian historian, has no doubt that Syrians have the dedication and expertise to rebuild the mosque. “I think it’s well within their skill range. What they needed was the money to employ and train their own skilled workers and acquire heavy machinery, which they apparently have in the case of the Great Mosque,” he says. “We should not assume that experts from abroad would be more sensitive to the task of reviving such a monument.”

He points out that many of Syria’s great monuments have been reconstructed, restored, or patched up over the years, especially in the past century. The Great Mosque’s minaret is no exception. Burns shares a photograph of the minaret pre-1914, and another he took in 2005. They show that in the interim, much of the minaret’s facade was reconstructed. 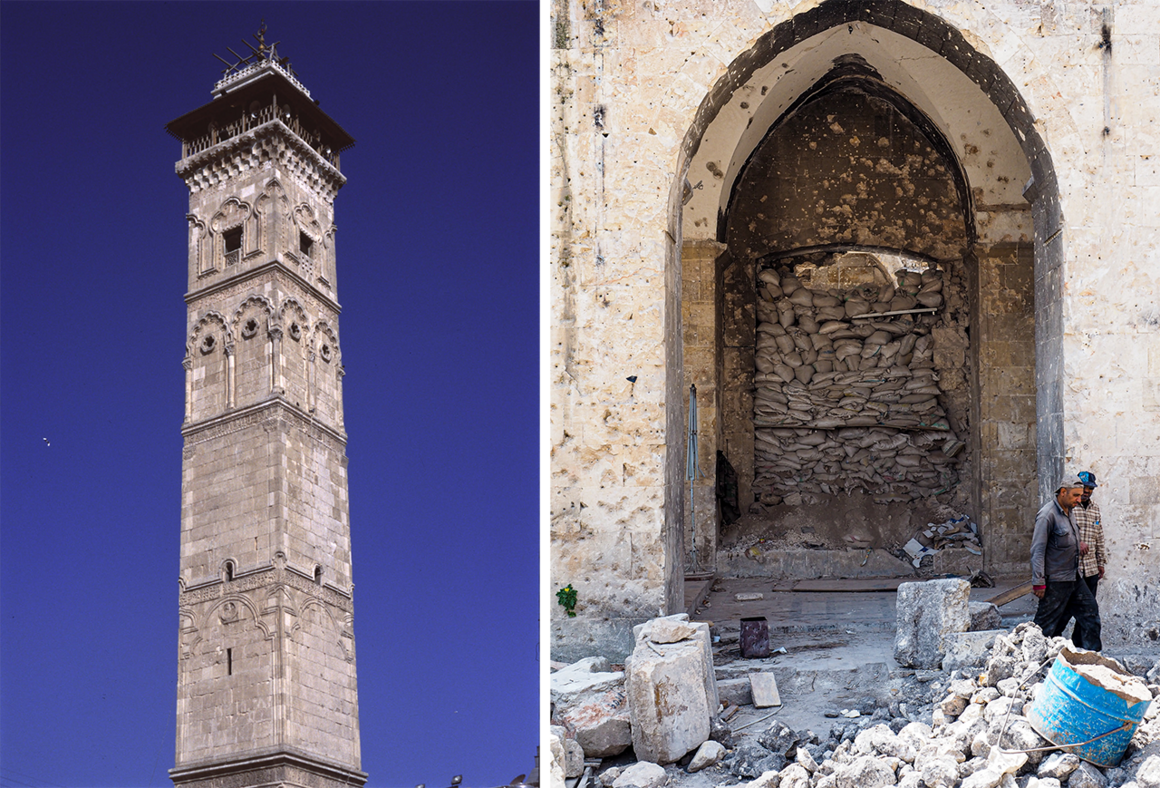 At left, a photograph of the Great Mosque’s minaret as it appeared in 2005, after reconstruction work on the facade. At right, workers stand near a sandbagged gateway to Aleppo’s Great Mosque in 2019. COURTESY OF ROSS BURNS; COURTESY OF ALEX RAY

Aleppo’s Old Quarter was once famed for its 13-kilometer labyrinth of covered souks, mosques, churches, public baths, and inns. Most of the souks, or marketplaces, date to the 14th century, and are named after the crafts and products they nurtured: the wool souk, the copper souk, the leather souk, and so on. UNESCO estimates that the conflict destroyed about 10 percent of the Old Quarter’s 500 historic buildings, and caused moderate to severe damage to more than half of the remainder. One portion of the marketplace, Souk al-Saqatiya, was recently restored and re-opened.

For residents of the Old Quarter, the Great Mosque had a significance beyond religion and its architectural status: It was vital to the social life of the city. The prayer hall gates opened directly onto the souks, Kasmo explains. “People would do their shopping, then walk into the mosque to pray, rest, and talk to their neighbors while their children played in the courtyard.” He expects the restoration project to attract international attention—and criticism. “Each restorer has his own way, and any job of restoration anywhere in the world will attract criticism. That is normal and should be expected.”

Though a mosque was built on the site early in the 8th century, construction of the current building took place from the 11th to the 14th century. UNESCO notes that throughout its history, the mosque has undergone multiple adaptations and reconstructions due to natural disasters, deliberate destruction, and expansion. Oulabi and Kasmo are veterans of its most recent restoration, done between 1999 to 2005, after the minaret developed a 40cm inclination. To stop it from leaning any further, they reinforced the walls with internal horizontal and vertical steel links, and injected mortar into cracks. The interior surface of the walls was further strengthened with aramid fibre. 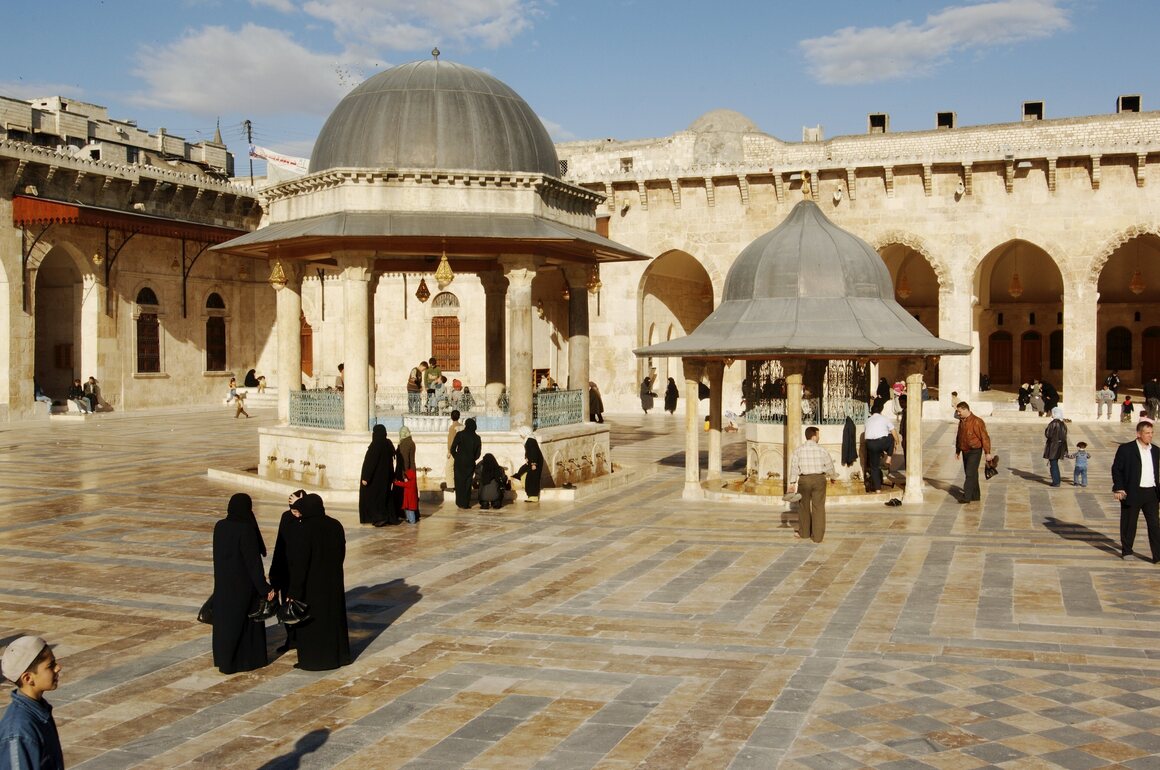 Inside the mosque’s main prayer hall, walls and cross-vaulted ceilings are scorched by fire and pockmarked with thousands of bullet holes. The plan is to embed stainless steel pins into each bullet hole, to help fix mortar in place. “We made 22 different types of mortar before we got the right strength and color,” Kasmo says. “Our modern plaster didn’t match the original, so we had to import it from Egypt.”

Master woodworker Ahmad Khattab is in charge of recreating the mosque’s smashed and burned timbers, including gates, doors, archways, and blind windows. Using imported walnut and teak, his team works from AutoCAD drawings, which were created digitally from photographs and broken originals. “There are 12 unique archways and each one could take two to three months to make, because we don’t use nails or glue,” Khattab says.

Oulabi believes that the restoration will take another three years to complete. Work started in early 2018, but the site’s tower crane took six months to arrive from Damascus; the army did not control the entire 400-kilometer route. Now, a shortage of skilled tradespeople is the main reason for delays. “We are training more people in the use of hand tools and traditional craftsmanship, but it takes time,” Oulabi says. Perhaps, he adds, these same workers will help to restore the other historic sites that define Aleppo. “Eventually, the whole of the Old City will benefit from the new generation of craftsmen we are producing.

Chris Ray is a freelance journalist and writer who covers social and political issues for publications in Australia and abroad.