As a teacher, I have always asked myself what sets us apart from other professions. Is it possible to ‘leave’ our work at work and not to bring it into our private lives? How not to get involved and treat it just as ‘work’? To tell you the truth, it’s not possible!

No matter how much we try, we DO get involved. We DO have our ‘favourite’ students who stand out, who influence our lives and teach us infinite things. There are many names that come to mind, but one certainly stands out ‘taller’ than others: Karla Medawar.

Why Karla? This beautiful young woman who arrived here 9 months ago, with such a clear vision of what she wants to achieve in life. No goal is out of reach for Karla. She always says to me, “Everything is exactly as it should be. Not more, not less.”

This statement appears in my mind every time I question things in my life and in the world in general. “Everything is as it should be.”

Karla’s admission to RMIT’s Bachelor of Engineering with recognition of her years of studying the same in Syria is exactly as it should be. Certainly for Karla.

Karla, the world is your oyster!

Q: “Everything is as it should be.” Is that your philosophy of life?

I think so. It gives me strength. I am a very realistic person. I like to (acknowledge) the reality. I don’t like ‘what if? and ‘what if not?’ .  Conditionals.  I like (to attend to) the reality, to know what will happen, to organize myself for it and to face it. ‘’

I don’t see it like that.  Now is just a time when a lot of possibilities are happening, here in Australia and in Syria. And one person, he or she can’t radically change the situation, and turn it upside down. Everyone can just stay on their way.  Nothing will die.

Q: What do you mean ‘nothing will die’?

I mean the good things. The spirit of the Syrian people.

Q: How do you define the spirit of the Syrian people?

Of course I respect the spirit of all the people in the world, in the Arab world and beyond, but I think the Syrian people have something special, even with all the corruption and all the war there. I think we have something different. A lot of conflicts have happened in a lot of countries around us, and we just stand for a long time. To be honest, in one way in Syria there is cruelty, but in the other way, there is just the normal life. You can see that the war is totally 100% political. All the bigger powers in the world have contributed to it. And we can do what we can do. So the people in the west, in countries at peace, they will continue their lives, and unfortunately, the people who suffer under ISIS will continue their lives of suffering.

To be honest, I like acts of courage, and inside me I’m a revolutionary, or a rebel. I like to change things for good, but real life is not a fairy tale. You have to understand the situation and what is your role, and even if you understand all of this, still you can’t do anything. You just support your family, support your friends, try to achieve something and in the future maybe you can pay back someone.

Being Syrian is all that matters. It doesn’t matter what their faith is. There is this common understanding about being Syrian. And I am not talking about who should rule Syria and who should not. To be honest, now after all the blood, no one cares who rules.  We just need our peace. Just give us Syria on the ground.

Syria will not be different.  Except for the east of Syria, people there have suffered the most, and they will take a long time to recover. They have seen seven hells.

What can a person like me do?  I know my limitations. But I need to extend my limitations, to extend my capabilities. And I have only one way: through knowledge. And so I should have a lot of qualifications. That will be my first step in building myself. And then I will be a person who can contribute.

I love God. And my mother is very devout. But I believe now if you want to see real results you should understand the concrete realities.

Q: What is your experience of being a refugee?

To be honest, I don’t feel like being a refugee. We hear a lot of stories about the suffering of refugees in Europe, even in Canada, but here in Australia, I think the government has done a great job.

I’m a person who is realistic, so when I moved from Syria to here, I believed it was the best choice I could make. I couldn’t achieve anything there. I was planning to travel before the war. It was my dream to achieve something in my life.

Q: Do you have a loyalty to Syria?

Of course. Until my dying day. But I need power to repay (Syria). …After some years, I will become an Australian citizen, so I will have responsibilities to this country, too. I will graduate in Australia; it will help me achieve my dreams, so of course I will have a debt toward this country and for all the people who have helped me.

But I will not forget Syria at all. I am first Syrian and then I am Australian.

Q: How do you explain people’s love for Syria?

Everyone loves their country…I think we have a spirit. You know Syria is an ancient inhabited country, and a lot of things have happened on that land. Each generation leaves something there. And that is why we become like this.

It is a bit similar to Aboriginal people. Syria has always been a land of conflict. A lot of people have lived and been killed there.  A lot of generations have come and built something, and continued to build even when there is war.  We are really ancient.  To be honest, I didn’t feel this before the war. I have felt it since the war started.

It’s our home country. Since the war, a lot of Syrians have felt that Syria is like a mother nurturing its people. Even the actresses who visited Australia (for the film festival) feel the same. I didn’t expect that.

Q: Is your dream to go back to Syria and rebuild Syria?

No, my dream is to help Syria in some way, with my power, my money.  I don’t know what I will do. When I am a successful professional in my field, I will be able to invest money in rebuilding Syria. I think when I get older, I will have a real voice.

Someone told us we are cowards, that we ran away from Syria when it needed us, I told him, ‘Just wait for a couple of years and you will see’.  These days, if you have money, you have power, and if you have power you can do whatever you want. And I know I have good intentions. I will always be proud of being Syrian, no matter what.

Q: What would you like Australians to know about Syria?

We are open-minded. We are normal people. My generation is really open to a lot of things, so we can really go along with the lifestyle in Western countries. It was really easy to fit in here.

Q: I understand you’re into Australian Rules Football in a serious way.  How did that start?

Oh, my gosh, it was amazing. Our neighbour, Leanne, told me, ‘You have to have a football team!’  Before the football season started (in 2017), she and her husband, Gary, and daughter, Hannah, invited me to the first game of the season.

Karla went on to explain that she sat in the MCG Members Stand with Leanne and family, but before going she watched videos to work out the rules of the game. Gary gave Karla an Essendon scarf and said, ‘You don’t have to decide, but just see.’  Now, Karla says she feels ‘the spirit’, and when Essendon plays, she ‘goes with it’.  Already this season, she’s been to six games. 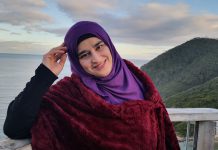 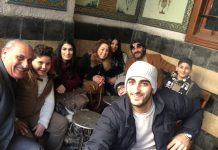 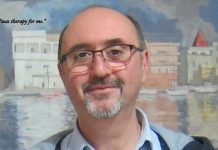 A Syrian Artist Finding a Voice in Australia