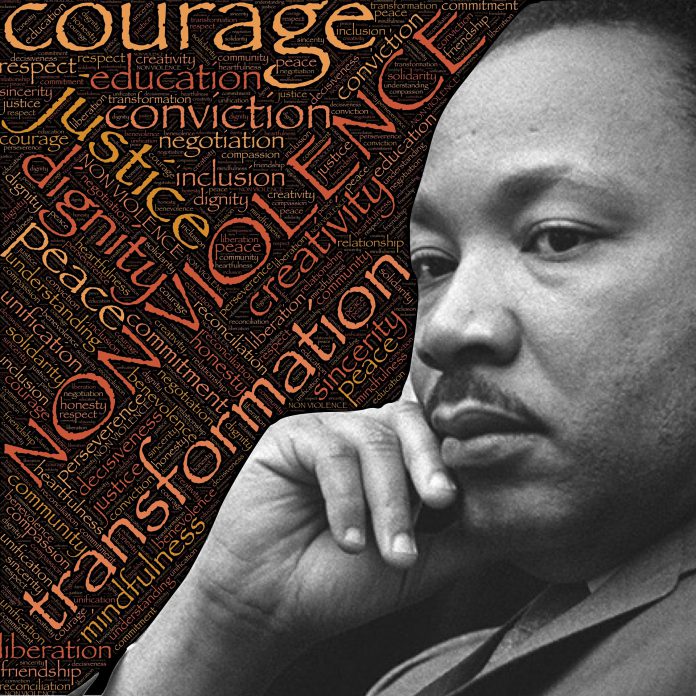 In 1967, the United States was embroiled in the war in Vietnam. On 4 April 1967, Martin Luther King delivered an anti-war address at Riverside Church, Upper Manhattan, New York. It was titled ‘Beyond Vietnam‘. Exactly one year later, he was assassinated.

The address was controversial. There was great pressure on Martin Luther King to focus simply on Civil Rights, maintain his good relations with the White House, and not speak out against the war.  But for him, America’s militarism abroad and racism and poverty at home were linked.

Martin Luther King described the American government as “the greatest purveyor of violence in the world”. His conscience led him to protest.

We are at the moment when our lives must be placed on the line if our nation is to survive its own folly. Every man of humane convictions must decide on the protest that best suits his convictions, but we must all protest.

As the title of Martin Luther King’s address on 4 April 1967 indicates, he saw the problem of US violence going beyond Vietnam, both in geography and time.

When machines and computers, profit motives and property rights, are considered more important than people, the giant triplets of racism, extreme materialism, and militarism are incapable of being conquered.

Martin Luther King’s second anti-war address at Riverside Church, ‘Why I am opposed to the war in Vietnam’, encourages a search for the truth.

In international conflicts, the truth is hard to come by because most nations are deceived about themselves. Rationalizations and the incessant search for scapegoats are the psychological cataracts that blind us to our sins. But the day has passed for superficial patriotism.

Martin Luther King was not deceived: American militarism and ‘the evils that are rooted deeply in the whole structure of our society’ are closely connected. That is why he came out bravely to express his opposition to the war in Vietnam. It is not fanciful to imagine that were he alive today he would be expressing similar opposition to America’s war against Syria.

Whoa! How can that be when in Syria, America – with Britain and Australia in tow – is nobly trying to defend the people of Syria from a ‘butcher’ bent on massacring his own people?

Well before Assad, it was Ho Chi Minh who was demonised, while America preferred to support, in the name of installing democracy, generals with names like Diem and Ky who oppressed their people atrociously.  In the same way we, the West, are happy to close our eyes to the dominance among the armed groups fighting the Syrian government of bloodthirsty Islamists without even pretensions to be democrats, as long as we can remove the ‘authoritarian’ Assad and stymie the Russians and replace Assad with Islamists who will dance to our tune.

But America’s wars ‘racist’? Isn’t that a bit OTT? MLK didn’t think so. He identified ‘the giant triplets of racism, militarism and economic exploitation’ as interacting together to generate blatant racism at home and imperialism abroad. With an American President in the White House who is unashamed of enjoying popularity with the Ku Klux Klan, whose approval ratings soared when he unleashed his Tomahawks (the name an interesting subliminal nod to America’s original significant ‘Other’), and whose Secretary of State announces an intention to maintain a US military presence in Syria for as long as ‘stabilisation’ takes, joining the dots is not too difficult.

Not that Trump deserves more opprobrium than his predecessor. What would MLK have thought of a legatee of the civil rights movement who waited only three days before unleashing a programme of drone strikes far greater than anything Bush Jr had authorised, arrogated to the Presidency a right to kill anyone without due process, and who oversaw an unleashing of US military might against the people of Libya, Somalia, Afghanistan and Pakistan with untold numbers of civilian casualties dismissed as just unfortunate ‘collateral damage’? Who gloried in the success of the Navy Seals in extirpating a nemesis of America code-named, yes, Geronimo? Who anointed as his successor a foreign policy hawk who was visibly salivating at the prospect of reversing Obama’s relatively cautious policy towards military involvement in Syria?

But all we saw from this ‘culmination of the civil rights movement’ was ‘empire-lite and torture-lite’. ‘Empire-lite’ in Syria meant working through proxies

As pointed out by Pankaj Mishra [London Review of Books, 22 February 2018], ‘Obama seemed to guarantee instant redemption from the crimes of a democracy built on slavery and genocide’. But all we saw from this ‘culmination of the civil rights movement’ was ‘empire-lite and torture-lite’. ‘Empire-lite’ in Syria meant working through proxies, funding to the tune of hundreds of millions of dollars the so-called Free Syrian Army, supplying dubious militants with weapons, training and salaries, dragooning Western allies into imposing draconian sanctions which are war in all but name, and conducting propaganda campaigns to demonise a secular government imperfect but no worse in terms of democracy and human rights than any of our Gulf allies.

‘A racist society can’t but fight a racist war’, said James Baldwin in 1967. ‘The assumptions acted on at home are also acted on abroad’. So it has been with Trump’s war in Syria, with scores if not hundreds of pro-Syrian government forces killed in what must have been like a mass lynching in Deir Ez Zor province when the Syrian force dared to get close to the US-backed forces, not a single one of whom was killed.  ‘Injun’ country indeed, as American soldiers like to describe the places where they are sent to kill.

It is no accident that countries with a similar history of colonial dispossession and racism (Australia does the cap fit?) are always only too ready to act as acolytes to American imperialism.

With voices like that of MLK to contend with the home front could not hold. Yet it was several years before America finally withdrew its claws from the stricken country.

The Americans couldn’t win in Vietnam. With voices like that of MLK to contend with the home front could not hold. Yet it was several years before America finally withdrew its claws from the stricken country. And so it promises to be with Syria, where no serious commentator believes that Assad can be prevented from regaining control of his country, as Ho did with his. But still America insists on prolonging the pain by attempting to colonise Syria’s oil-rich ‘Wild East’, by forming new mercenary militias with tame tribes, by conducting relentless information and economic warfare.

The searing experience of Vietnam and then the only slightly less searing experience of Iraq has made America leery of full blown large scale direct military interventions, except where air power is concerned. War on Syria is pretty painless, for Americans. And so we are not likely to hear from any latter day Martin Luther King. But his words  still echo down the decades: “Don’t let anybody make you think that God chose America as his divine, messianic force to be a sort of  policeman of the whole world….I can hear God saying to America: ‘You’re too arrogant!’”.

A Syrian Millennial’s Eulogy To The Bad Times And Good 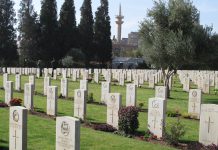