In 1992, The Washington Post published a favourable review of Dr Bouthaina Shaaban’s book, ‘Both Right and Left Handed; Arab Women Talk About Their Lives’ (first published in 1988).

Dr Bouthaina was born in the 1950s and grew up in a village in countryside Homs. When the Washington Post review was published, she had a PhD in English Literature from Warwick University and was an associate professor of English literature and women’s studies at Damascus University.

This was eleven years before Iraq was occupied and officials in the Bush administration, such as John Bolton, claimed Syria was linked to an ‘axis of evil’.

I read ‘Both Right and Left Handed’ soon after I started teaching at the British Council in Damascus. That was in 2003, after the invasion of Iraq. War was just across the border and hundreds of thousands of refugees were crossing that border to seek refuge in Syria.

The candour of the author and that of the women Dr Bouthaina interviewed for the book astounded me. The book was an eye-opener. For me, relations between the sexes in the ME became less mysterious, less defined by stereotypes, and instead more human, more graspable. But, of course, they could be characterised by abuse and sorrow.

The Washington Post presents this story in the review.

The unnamed wife of a Syrian university lecturer tells how her husband beat her, banned her from seeing her own family and wouldn’t eat her food because he feared she would poison him.”But I know that had I not submitted to his will our marriage couldn’t have lasted until now,” the woman said. “I am now the person he wants; there is hardly anything left of me,” she added, breaking into tears.

This is the story I most remember:

… there is the interview with a 60-year-old Syrian woman identified as Um Mohamad, or Mother of Mohamad, who was married off to a man who already had another wife. She described a marriage of 48 years marked by beatings and perpetual work on their farm while her philandering husband ignored his family. The two wives became best friends — and lovers.

In 1993, Dr Bouthaina wrote an article titled ‘Arab Women Writers? “Are there Any?”’ for Washington Report on Middle Eastern Affairs. That article points to who, I believe, Dr Bouthaina was and still is: a proud and vocal feminist, a woman undaunted by boundaries and with a committment to human values cherished by all peoples.

This is the article’s conclusion:

….this new generation of feminist writers has illuminated women’s strengths and dispelled deeply entrenched taboos about their weaknesses. The new woman that emerges in Sahar Khalifa’s two-part novel, Al Saabar and Abad Al-Shams defies and dissociates herself totally from two traditional concepts of women. The first is that women are weak and unable to maintain a family after the disappearance of its male provider. The second is the entrenched view of women’s honor, which had disastrous repercussions on the fate of the Palestinian people in 1948. From the author’s brilliantly interwoven depiction of the social matrix of Palestinian society in the occupied territory, a new, confident and creative Arab woman emerges who breaks all stereotypes of women’s weakness or inferiority.

Such women authors not only are recording the changes in challenged societies, they are a catalyst for this century’s dynamic response.

Now that war has crossed the border into Syria, Dr Bouthaina’s current position as ‘top advisor to President Bashar al-Assad’ means she has had US-led sanctions imposed on her. Her freedom to travel has been curtailed and our ability to give her views careful consideration has been restricted. (Note: Dr Bouthaina used to be interviewed via Skype on the ABC. For example, see Sept 2016 interview here and Sept 2015 interview here.)

I first met Dr Bouthaina in 2004 when I sought her support for a planned visit by a group of Victorian State parliamentarians. One or two intransigent Syrian officials were placing obstacles in front of their visit. Dr Bouthaina was then the Minister for Expatriates and she used her influence to ensure the Victorian MPs could, firstly, visit Syria and, secondly, would be warmly welcomed. (Their visit led to a Syrian delegation of civil engineers and officials visiting Melbourne and regional Victoria to get advice, I understand, on matters related to road and highway safety.)

When I visited Damascus in September 2019 on a journalist’s visa to represent ‘Beloved Syria’, I was given the opportunity to interview Dr Bouthaina. For me, it was an honour. Dr Bouthaina and I are both children of the 1950s; we have both studied English literature; and we would both see ourselves as feminists with a commitment to working for a better world. 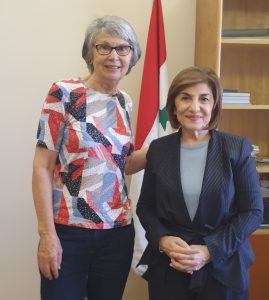 It’s a complex world, one that is not easy to see our way through. Dr Bouthaina’s voice is an important one; it can guide us to a more respectful understanding of Syria and its people.

In this first part of my interview with Dr Bouthaina, I ask her how her perspective on women’s issues would be different today from what it was when she wrote ‘Both Right and Left Handed; Arab Women Talk About Their Lives’.