This video interview with Professor Maamoun Abdulkarim took place in a Damascus cafe on 22 September 2019. It wasn’t the best environment to discuss a serious subject, and I had no external microphone for my mobile phone, but we made do.

(For a transcript of the interview, please go to the bottom of this page.*)

During the worst years of the war in Syria, when there was theft and looting of thousands of precious ancient antiquities, Professor Abdulkarim was given the unenviable task of leading a team to collect and protect as many of the ancient objects as possible, from archaeological sites and museums across the country.

Doing this critical work in such dangerous times, there were almost inevitably going to be martyrs. This is dedicated to them and to other Syrians, such as Professor Abdulkarim, who risked their lives to protect treasures precious to all humanity: those treasures tell our story.

‘We need today this international solidarity, because what brings us together is our common heritage.’

In March 2016, Professor Maamoun Abdulkarim, then Director of Syria’s Antiquities and Museums Directorate, wrote an Opinion piece for The Guardian. It was titled ‘Restoring Syria’s pearl of the desert: a reason for optimism amid the storm of terror’.

Syria’s ‘pearl of the desert’ is Palmyra, an ancient city on an oasis that once linked ‘trade routes in Persia, India and China with the Roman Empire – a crossroads of the ancient world’.

(Many people may know of Palmyra from the story of Queen Zenobia, who famously stood up against the Roman Empire.)

In May 2015, Palmyra had been attacked and occupied by Daesh, the Islamic State terrorist group. In the following days, those executed by Daesh included 25 Syrian soldiers killed by teenagers, in a manner reminiscent of ancient Roman times. 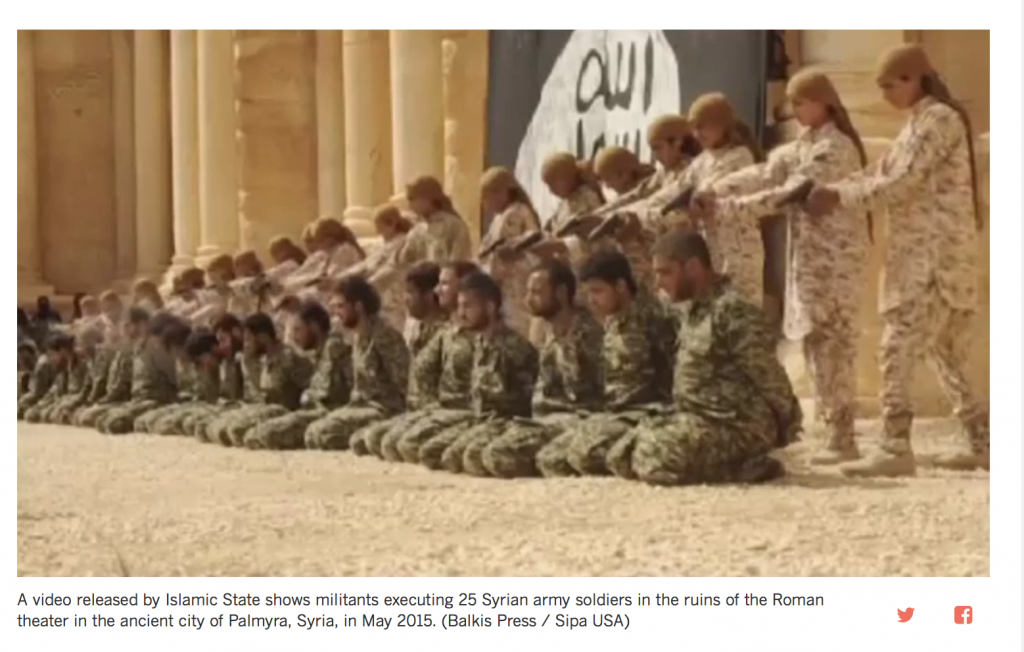 Another victim of Islamic State was 81-year-old scholar, Khaled al-Assad, the director of antiquities at Palmyra. In 2018, the BBC series ‘Civilizations‘ paid tribute to ‘the heroic archaeologist who died defending Palmyra from Isil’.

Khaled al-Asaad was born and died in Palmyra, a Unesco world heritage site that ranks alongside Pompeii for its beauty and importance. For half a century, he was the ancient Syrian city’s most dedicated guardian – until he was beheaded by Isil militants in 2015. (byTristram Fane Saunders for The Telegraph, 1 March 2018)

Dr Abdulkarim’s Guardian Opinion piece was written after Daesh (Islamic State) fighters had been defeated in Palmyra and it was time, as he wrote, to ‘breathe life again into Palmyra’.

We will issue a challenge to international terrorism, that no matter what you do you cannot erase our history, and we will not sit idle and weep over the ruins.

Professor Abdulkarim’s and his colleagues’ concerns were not just with Palmyra, of course. Historical sites across Syria were under attack and antiquities were being looted and taken out of the country.

I have been a professor at Damascus University for 20 years, and I worked as director general of antiquities and museums in Syria between 2012 and 2017, in a very hard period. It was violent. There was war. In each part of Syria, we had a lot of conflict. How can you (operate) in these conditions? We have 34 museums in all of Syria. We had more than 10,000 sites. How can you protect them? How can you make a new strategy during war about saving the cultural heritage?

It’s for these reasons, we started to close all the museums in 2012. I said to myself, “The violence is so hard. We cannot wait any longer”. One or two weeks after my nomination, I closed all the museums in Syria. We hid all the objects in safe places in each area and we (secured) all the gates, windows etc by a scientific system in ways to protect things: anti-fire, anti-humidity, anti-heat, anti-explosion, looting, etc.

We worked hard on these questions but over time, we discovered that the situation would become worse, especially between 2014 and 2015.  It was for this reason, despite all the difficulties in Syria, and in Damascus, we decided to collect all the objects all over Syria and transport them to Damascus. Through this operation, we saved about 300,000 objects in all the museums in Syria.

But if you do this work for the museums, how can you protect the cultural sites under control of ISIS, Jabhat al-Nusra, (etc)? No police, no law in these areas.  It is because of this, we focused our work on cooperation with the local community.

We worked hard with the local communities for them to understand that it was first their heritage, then our common heritage, and thirdly world or international heritage. It was their responsibility to defend their site.

It was a good idea.

We launched the campaign ‘Syria: It’s My Country’. The campaign included a lot of beautiful images on television, interviews, and also seminars, as well as contacting people through cultural centres in each area. We distributed images of Syria’s cultural heritage.

All this campaigning helped us to reduce the impact of the war on the cultural heritage.

It was a good idea that –

Also, we worked hard with the international community, with the journalists, all the media in the world.

We tried to be transparent, to be honest in all of the speech. We refused to use our cultural heritage … for propaganda, for political agendas.   We said it is our common heritage. It is universal.

How can we convince all the people to come together despite the differences in political views? That wasn’t our work. Our work related to cultural heritage. How can we save this heritage for humanity, for our children, for the future?

And fortunately, the international community  through organisations like Unesco, ..   Interpol, universities, archaeologists, specialists about Syria – helped us.

So my mission gave us some courage to stay in Syria, not to leave Syria, despite all the difficulties. No electricity at home, no mazout for the heating, no water at times, but we stayed .  We said, it was a good idea to stay and defend. It was resistance, resistance for the sake of the cultural heritage.

It wasn’t a political message. How can we save our identity, our common memory of these people?

I think it was a hard time, but today when I think of it, I am proud. I am proud to stay as an independent man, a scientific man, to work with all of Syria, and to focus on one thing: how we can save this heritage, this common memory for all Syrians, for our children, and not be condemned by children in the future. (They can’t ask, ‘Why didn’t you work to save our heritage?) We can prove that we did a lot of things. We saved the absolute majority of the collections.

*As mentioned above, the situation for this interview with Professor Abdulkarim was far from ideal – it was a noisy cafe and I didn’t go equipped with an external microphone. Before publishing the above, a draft was sent to Professor Abdulkarim to ensure accuracy in regard to dates and key facts.