Video, September 2019. Susan Dirgham. On the way to Beit Jabri.

In the introduction to her book ‘Damascus: Hidden Treasures of the Old City‘ (Thames & Hudson, 2001), Brigid Keenan begins,

My husband, a diplomat, was posted to Syria in 1993, and I went with him. Very soon, like Isabel, wife of the famous British Consul Richard Burton a hundred and twenty-odd years before me, I found myself in love with Damascus. (Long after she left Syria, Mrs Burton was often asked if she had liked Damascus, to which her response was: ‘Like it! My eyes fill, and my heart throbs even at the question …’ She described an afternoon spent picnicking on Qasyun mountain shortly before she and her husband were obliged to leave the country, as ‘my last happy day’.) 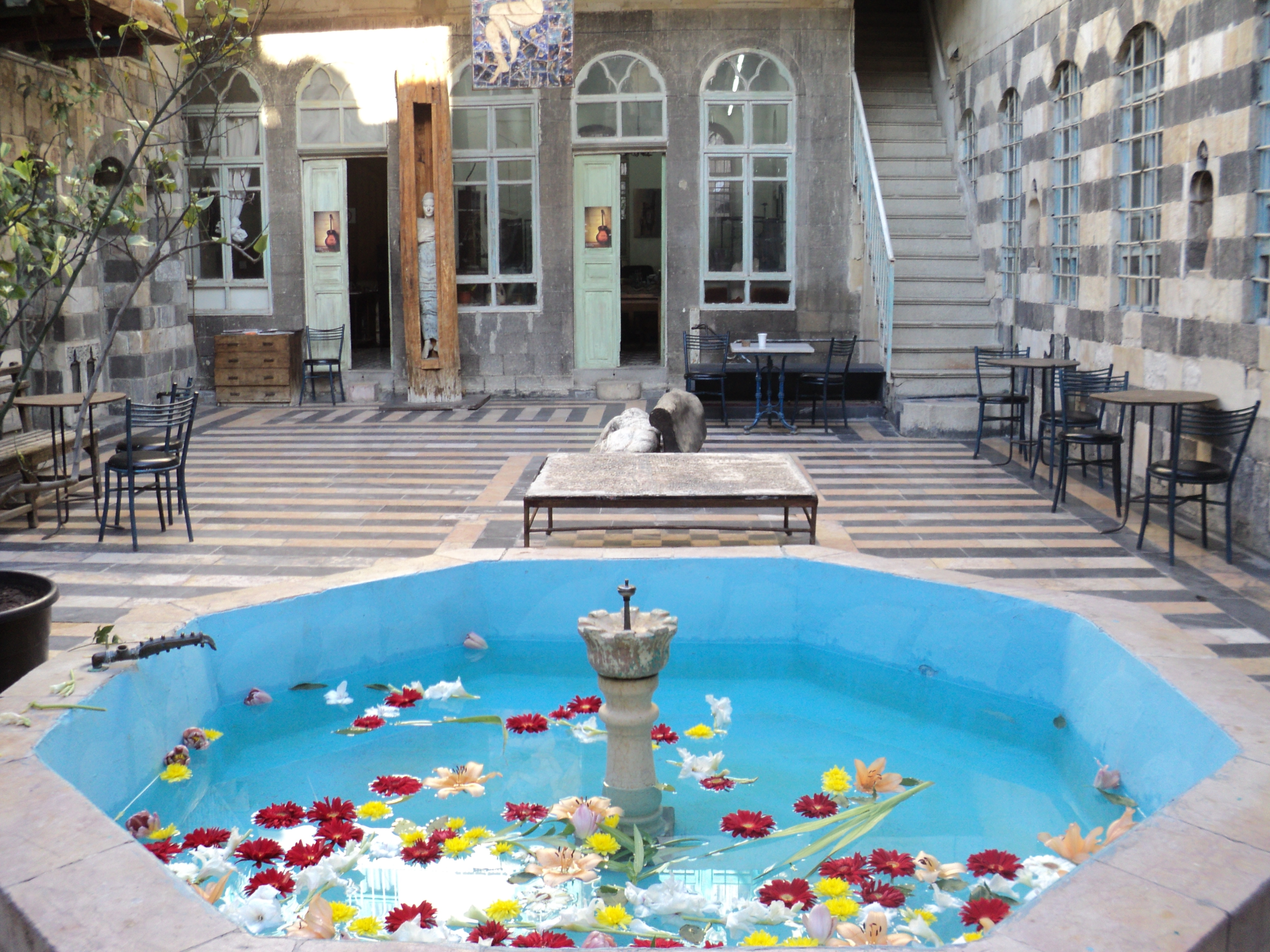 Wafic Rida Said has kindly given permission for ‘Beloved Syria’ to reprint his preface to Brigid Keenan’s book, ‘Damascus: Hidden Treasures of the Old City’.

I was brought up in an old house in Damascus, a traditional Arab courtyard house like the ones in the book. Looking back, I realise how ingeniously its architect had designed it to cater for the extremes of the Damascene climate. In summer we lived downstairs, in cool, shady living rooms which opened out into the courtyard garden, allowing the perfume of jasmine and herbs to waft though the house, where it mingled with the scents of coffee and cardamom. The soothing sounds of a waterwheel and fountains enchanted the tranquillity of this private place, a welcome refuge from the harsh summer sun. In winter, our life moved upstairs to the first floor, where the rooms were set out exactly as below, but warmly insulated from the cold by the richly decorated wooden panelling and exquisitely worked carpets. The layout of the house also answered the needs of the family’s public and private life. In contrast to the open-plan minimalism fashionable in the West today, unless they were intimate friends, visitors did not pass through the whole house when they came to call. The reception rooms (Al Majlis) had a separate entrance, so that the family could enjoy a great deal of privacy while offering the warm hospitality that is traditional in Syria.

This house where I spent my childhood, which combined the inside and the outside, the hidden and the revealed, the warm and cosy with the cool and airy, inspired in me a lifelong passion for architecture. Nothing has ever seemed to me so beautiful again.

It is a sad fact that people do not know what they have until it is gone. This is true all over the world and many architectural jewels have been bulldozed before people have realised their beauty. In the same way as many European country houses have been lost in the last few decades through neglect or changing tastes, many old houses in Damascus have not survived. Sadly, our family house was knocked down when a subsequent owner obtained planning permission to develop the site. It is a fate which has befallen many other old courtyard houses throughout the Arab world. They do not suit the conveniences, expectations and social structures of the twentieth, let alone the twenty-first, century. As a result, and unless new uses can be found for the courtyard house, all those old cities which are made up of such houses and which owe their beauty to them are endangered.

Brigid Keenan makes a compelling case in these pages for the preservation of one of these splendid cities, the one closest to my heart, Damascus. As she so evocatively shows, Damascus is a city full of fascination, no less for those who live there than for the traveller. Damascus is a city of souqs and historic trade routes, of brocade and craftsmen of all kinds, of the mountains and the desert, of an oasis and the Barada river, of the city gates and the Umayyad Mosque, of spices and perfumes carried on the breeze. But most of all, the old city of Damascus is one of family houses. They are its hidden treasures. …