In 1992, she immigrated to Canada but maintained close links with her family in Syria. There were joyful reunions back in Damascus, but in September 2015, a personal tragedy struck the Kurdi family.

Tima’s younger brother Abdullah, his wife Rehanna, and their sons Ghalib and Alan had fled the violence in Syria for the precarious life of a refugee family in Turkey. Abdullah and his small family had been denied entry to Canada, so in desperation they paid a people smuggler to take them across the Aegean Sea to Greece. In the rough waters, their flimsy boat capsized; Rehanna, Ghalib and Alan lost their lives.

The picture of young Alan Kurdi – the ‘boy on the beach’ – went viral; it brought international attention to the plight of Syrian refugees.

Since the family tragedy, Tima – who was a hairdresser by trade – has been an advocate for refugees, feeling compelled to step into the media spotlight to voice her grief and outrage, with the hope that she can encourage citizens around the globe to open their hearts to refugees.

Tima has been on a speaking tour in Europe and has spoken at universities in Canada and the United States. In 2016, she presented a TEDx Talk.

Abdullah and Tima have set up the Kurdi Foundation to honour Ghalib and Alan. The Foundation’s mission is ‘to help children whose lives have been torn apart by war.’ The Foundation has provided children in refugee camps with school supplies and clothing.

Like so many Syrians, Tima carries much grief and great anguish, but she looks for signs of hope – and sees them, sometimes in something as simple as the first flower on a jasmine plant brought from Damascus to her home in Canada.

In this first part of the interview, Tima spoke about growing up in Damascus. She also spoke about her brother Abdullah, the father of Alan – ‘the boy on the beach’.

See extracts below from ‘The Boy On The Beach’ 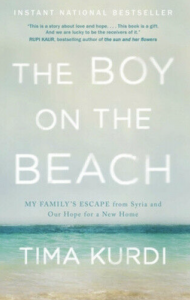 Tima finishes Part 1 of the interview with these words:

I always have hope that my country will rebuild; my country will come back to peace. And I want everybody around the world to go and visit… No matter how much I describe my country and my people in the book, it’s not the same when you go yourself and see it and feel it in your own personal experience.

No matter how much I describe my country and my people in the book, it’s not the same when you go yourself and see it and feel it in your own personal experience.

DAMASCUS – The CITY OF JASMINE

In Damascus, jasmine grows wild everywhere and seems to spring out of every vacant nook and cranny so that the air is permeated with its sweet smell. There is so much jasmine in Damascus that the city is nicknamed ياسمين الشام, Yasmine al-Sham, or the City of Jasmine.

THE FAMILY IN DAMASCUS

we were a regular middle-class family, perhaps not so different from yours. Our bellies were always full, and my parents renovated the house to make room for all of us. From the window in the bedroom that Maha and I shared, we had a bird’s-eye view of our neighbours’ rooftops. A few neighbours kept cages of دباسي, known as laughing doves, a type of pigeon very common in Al Sham with beautiful fluffy plumage, like pink champagne. When the doves were released, they danced and swooped in the blue sky. But with the blow of the whistle, the flock would faithfully return to their rooftop home. I think of them now with fondness. I wish we could all have the certainty that no matter where we fly, home will always be there for us.

As time passed, my dad used his knowledge about medicinal plants and herbs to become an apothecary at Souq Al-Buzuriyah in central Damascus. Mama was a great seamstress with an impeccable sense of fashion, and with her big, sturdy Singer sewing machine, she made us all beautiful clothes, including more than one set of matching outfits. My parents started travelling to other countries, and they brought back stylish clothes from Turkey, Italy, and as far away as Germany.

Our house on the hill was like a hotel, with people all always coming and going: relatives from Kobani, Hama, Aleppo, and Amouda, many family friends from other countries, and periodically, refugees, including Lebanese people displaced in the 1980s during the war with Israel. My father never forgot the early acts of kindness by his neighbours in Hama and Kobani when he’d been a child in need. And as soon as he had a home of his own, he had an open-door policy for anyone in need of a good meal and a place to sleep.

“Never close your hearts or your door to people in need.”

“But Baba,” Haha and I complained when friends and family were invited into the house, “we are tired of cleaning up after people.” Baba would sit us down and set us straight. “Never close your hearts or your door to people in need. Invite them into your home and given them a seat at your table.”

Our friends and neighbours were from all over Syria, from Homs, Daraa, Afrin, Bosra. They were Alawite Muslims, Shia Muslims, Christians, Palestinians, Lebanese, Circassians, Westerners; we were taught to respect everyone, whatever their cultural and religious beliefs, and believe that no matter what the heritage of a person, we are all one. Everybody in our neighbourhood was like family, and we took care of each other.

In 1976, عبد الله, Abdullah, was born. I was excited to have a baby brother, but I was worried that he’d be like so many other babies – always crying and making a fuss. My worries were unfounded. Abdullah was a sweet and happy baby, always smiling and laughing or sleeping like an angel. From the start, he had a very special bond with my mom. As soon as Abdullah could walk, he doted on her, telling her, “Sit, Mama,” while he tried to scrub the floors for her, or grabbed a stool so that he could reach the sink to help with the dishes. Abdullah was my mom’s reliable errand boy. She’d say, “ حبيب قلبي, sweetheart, I need an onion and some sugar,” and Abdullah would race down the street to knock on a neighbour’s door, or rush after the vendors with their carts of produce. His progress was always slowed by the neighbours, saying, “Sweetheart, have a piece of bubble gum.” Or, “Here’s a new marble for your collection.” The whole neighbourhood loved Abdullah and spoiled him, but all the attention only made him sweeter and more fun-loving. Even with the typical playground conflicts or sibling rivalry, Abdullah would turn the other cheek; he never carried a grudge.

Sarah and Susan can be contacted at info.belovedsyria@gmail.com