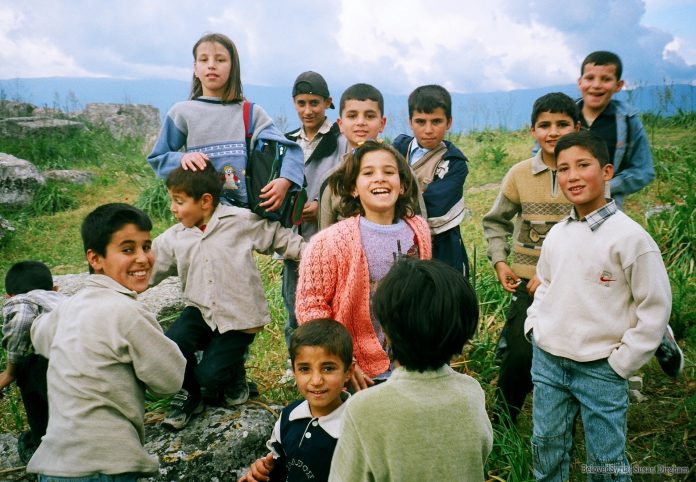 Syria extends from desert landscapes to fertile plains. There are undulating hills with olive groves that stretch to the Mediterranean Sea. Under the night skies, the lights of villages twinkle. Snow-capped mountains look down on modern suburbs, but also on ancient columns, khans, castles and places of worship.

There is evidence of earthquakes and invasions stretching back millennia, but for centuries, Syrians have heard the call to prayer and the ring of church bells, and continued to welcome strangers. Faith has been maintained while people struggle with their flaws and fears.

Familiar to homes across Syria are the morning rituals. Tables are laid with dishes of olives, cucumber and tomato; bread is warmed, and fresh olive oil is poured over dips. People sip rich aromatic coffee or sweetened tea and listen to the deeply soulful lyrics of their favorite songstress. As the day progresses, hawkers shout out their wares and cleaners sweep the streets. Public servants, shopkeepers, doctors, mechanics, housewives and students stop a servisse mini-bus on its route, find a seat, and pass their fare to the driver. The coins are passed from hand to hand till they reach the driver, and the change is returned likewise. Hands are touched, but there is a convivial respectful silence. In a taxi, it is a different story; drivers often engage in jocular banter with their passengers.

After school, children may play in the street while their older siblings pour over school texts. Young couples may be seen holding hands and laughing as they cross a busy road. The middle-aged and elderly gather to ruminate on life. Friends – young men and women in the same car – might drive to their favourite café, listening to the best in Arabic and Western music on the car radio, while the honking of horns, shouts, and the blaring of music might presage a wedding party.

Religious festivals are observed in accordance with centuries-old traditions. In some years, celebrations for Eid and Christmas coincide, and their decorations festoon the souqs. Faiths are cherished and people struggle with their shortcomings, work to overcome their fears and curb their vices, while striving to be generous.

Visitors notice that when Syrians are out in the world, they bargain, argue, laugh and connect. They engage with each other in a way that is timeless and heartfelt. Syrians love their land, their traditions and culture, and they are proud of their ancient history and the fact that their traditions and faiths have survived through the centuries, strengthened and enriched through struggle. There is something in the air in Syria. There is a spiritual connectedness felt by people of all faiths. God and Allah are one in Syria.

It is not unusual for Syrians to speak in a crowd about Love and for these sentiments to be acknowledged by the crowd. Syrians do not expect people to be angels, but hospitality, openness and graciousness are core aspects of Syrian culture. This can be seen in the eyes and faces of Syrians one meets. The sense of freedom women had to walk the streets alone at any time, day or night, attested to the trust they had in their fellow citizens.

However, since the start of the ‘Arab Spring’ in Syria, this trust has given way to fear and insecurity. Unspeakable horrors have been committed. Millions of Syrians have been driven from their homes and many seek sanctuary outside their country. Millions of Syrians carry physical and psychological wounds and feelings of deep grief, rage and a sense of betrayal must torment many.

Is it possible to suffer so much and still maintain a faith and a belief in the human spirit? How does one avoid being consumed by bitterness and vengefulness when the world appears to be going mad? If that drive in humans to express their humanity is maintained in Syria, there is hope for us all. 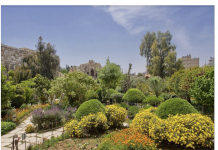 The gardens of Damascus: Can Syrians reconnect with nature?