Home Articles The gardens of Damascus: Can Syrians reconnect with nature? 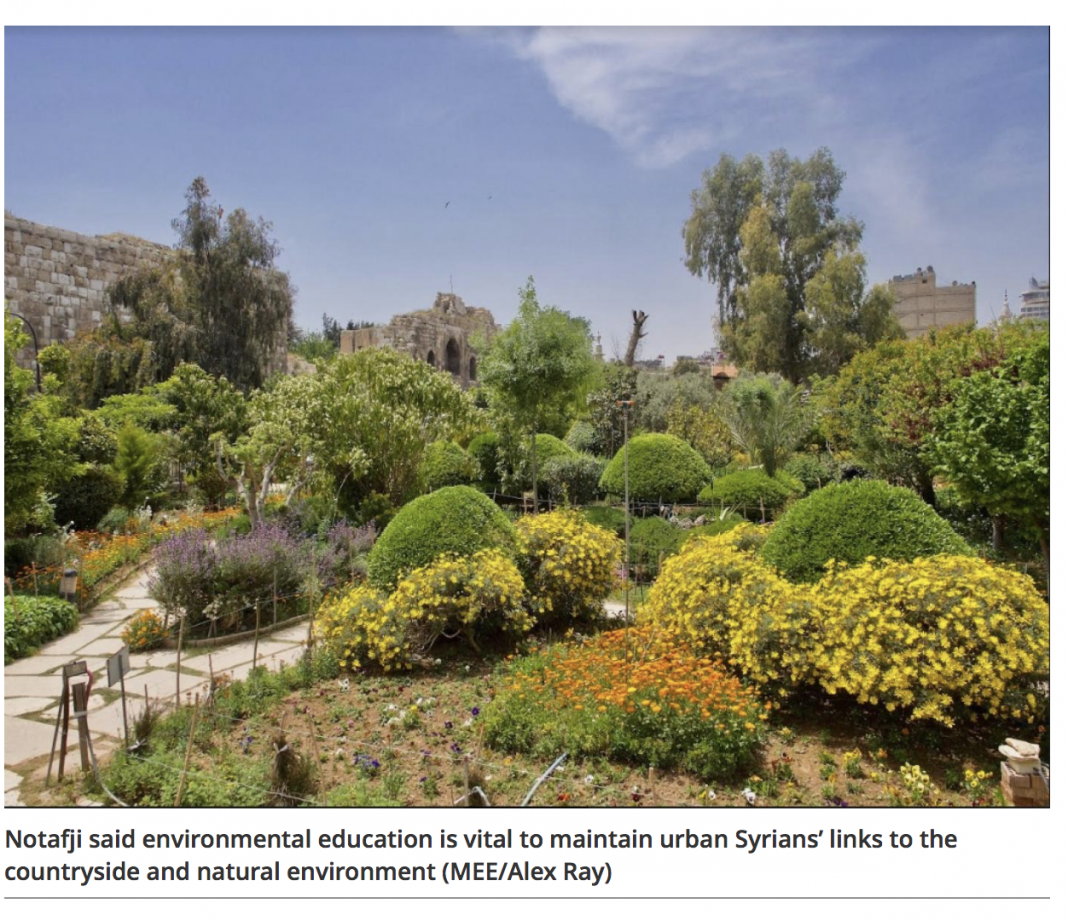 Written by Alex Ray and first published in Middle East Eye, 26 May 2019

The capital’s green spaces symbolise how many are trying to revitalise the environment amid the blood of war.

By Alex Ray in Damascus

Fareed Notafji sips the sweet, strong labourer’s tea as we sit in front of the guard shed at the SEA Environmental Garden in Damascus.

When people pluck these flowers, it’s like they are plucking my heart,” he says. 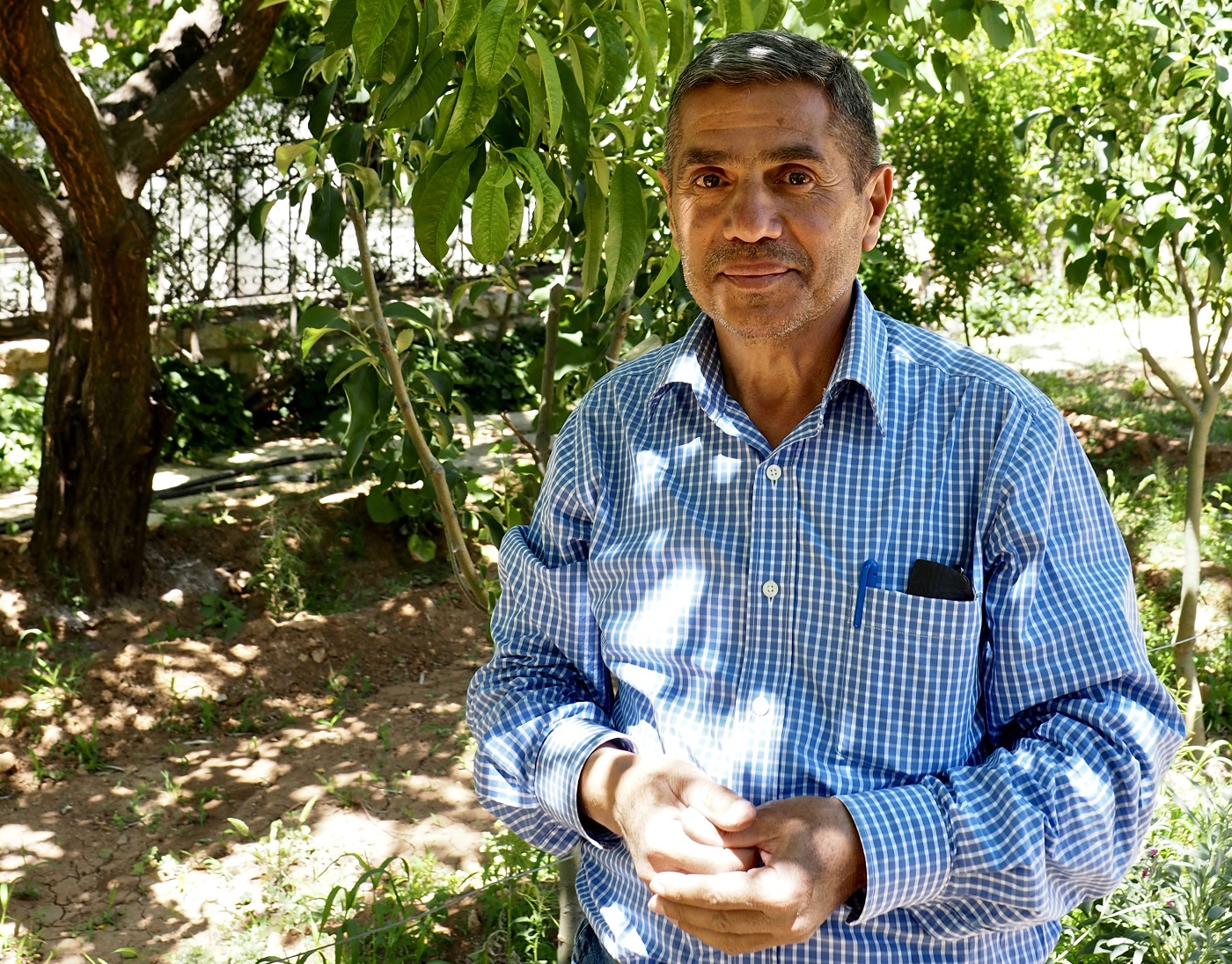 The sound of the fast-flowing Barada river accentuates the dreamy setting beneath the walls of the Old City.

The location makes it possible to momentarily forget about the ongoing conflict beyond the Syrian capital.

Notafji has been the gardens’ supervisor for 10 years, staying on voluntarily since 2014 after a lifelong career with the Ministry of Agriculture.

The gardens, which cover more than two square kilometres, have been his solace during the violence and social upheaval.

“I have managed to protect these gardens during the crisis, and thankfully nothing has happened here,” he says.

But he is dismayed by the disregard for the environment shown by visitors. “People these days are not like they used to be. They are more selfish and lack respect,” he says.

The gardens were established a decade before the war in 2001 by the Syrian Environment Association (SEA), using land donated by the Damascus Municipality and with financial support from the Swiss government.

Up until 2011, SEA – along with SEPS (the Syrian Environmental Protection Society) – ran projects that are still regarded as ground-breaking for the region, including converting plastic bags into artwork and furniture, paper recycling and improving municipal waste management.

Other work established medical waste management systems. Anissa Sidawa, president of the SEA, recalls: “We taught nurses and doctors in nine cities how to sterilise, sort and dispose of medical waste.”

Syria faced serious environmental challenges even before 2011, including pollution from water and industrial waste which threatened public health, according to a report by PAX, a Dutch NGO. 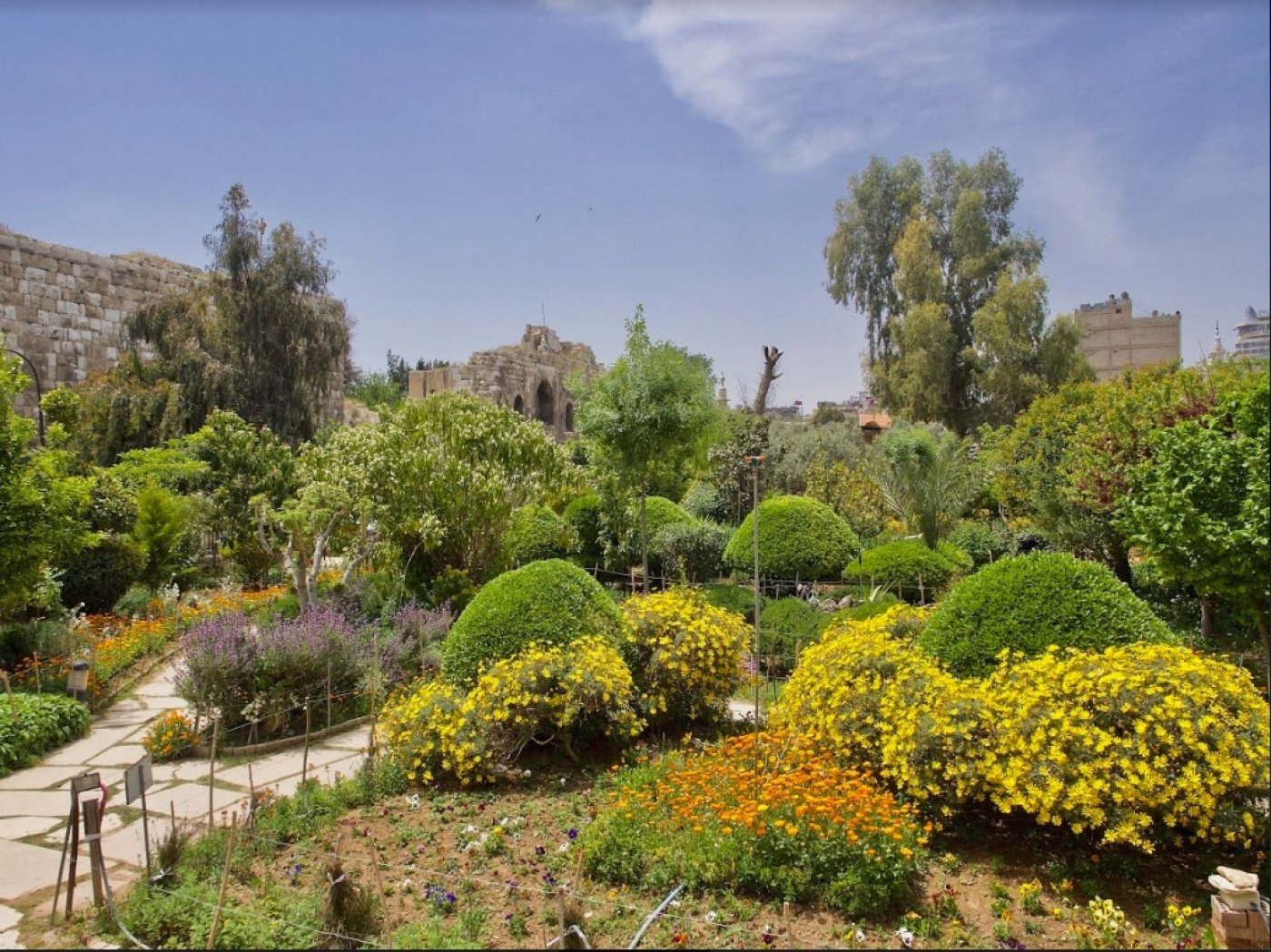 But the war has downgraded the environment as a priority, forcing the SEA to prioritise essential humanitarian assistance over ambitious green plans.

Now the SEA relies on limited funds from the gardens’ cafe and small profits from ongoing projects, such as the collection and recycling of plastic.

In Syria, the environment has not just been less of a priority since 2011: extreme drought, failing agriculture and rural migration to the cities have been clearly linked to the outbreak of conflict.

The impoverished outer suburbs of Damascus and Aleppo, for example, saw rapid and unplanned expansion before the war due to the influx of populations from the countryside.

This year, weather conditions have been more favourable. There was significant rain over Syria in early 2019, with the Barada river – which runs through Damascus and is threatened by drought, over-extraction and pollution – flowing strongly again.

Similarly, agricultural areas in the provinces of Damascus, Homs, Palmyra and Aleppo have bloomed with rich spring growth.

Notafji says environmental education is vital to maintain urban Syrians connected to the countryside and natural environment. “We often bring school children here to introduce them to nature,” he says.

“Many of them don’t get any education about the environment and their suburbs have no greenery.”

Sidawa is proud that the SEA has been able to continue its school education programmes despite the war. In 2018, the gardens hosted nearly 20,000 children from schools throughout the Damascus region.

She feels that the SEA can have the biggest impact on people when they are young and impressionable. “We give them seedlings to grow and some come back to us in tears when their plant dies,” she says.

Tarek al-Assad comes from Palmyra, about 160km northeast of Damascus. His family produced olives, pistachio, grapes and dates as well as keeping livestock, bringing in income and generating greater self-sufficiency. But then the Islamic State (IS) group arrived in the region in 2015 and most people fled.

“Except for some sturdy pistachios, the trees are all dead now,” he says.

“They haven’t been watered or looked after for five years. I lost olive trees that had been fruiting for nearly sixty years.”

The land, he says, needs populations with the knowledge and care of agriculture if it is to remain healthy and productive. 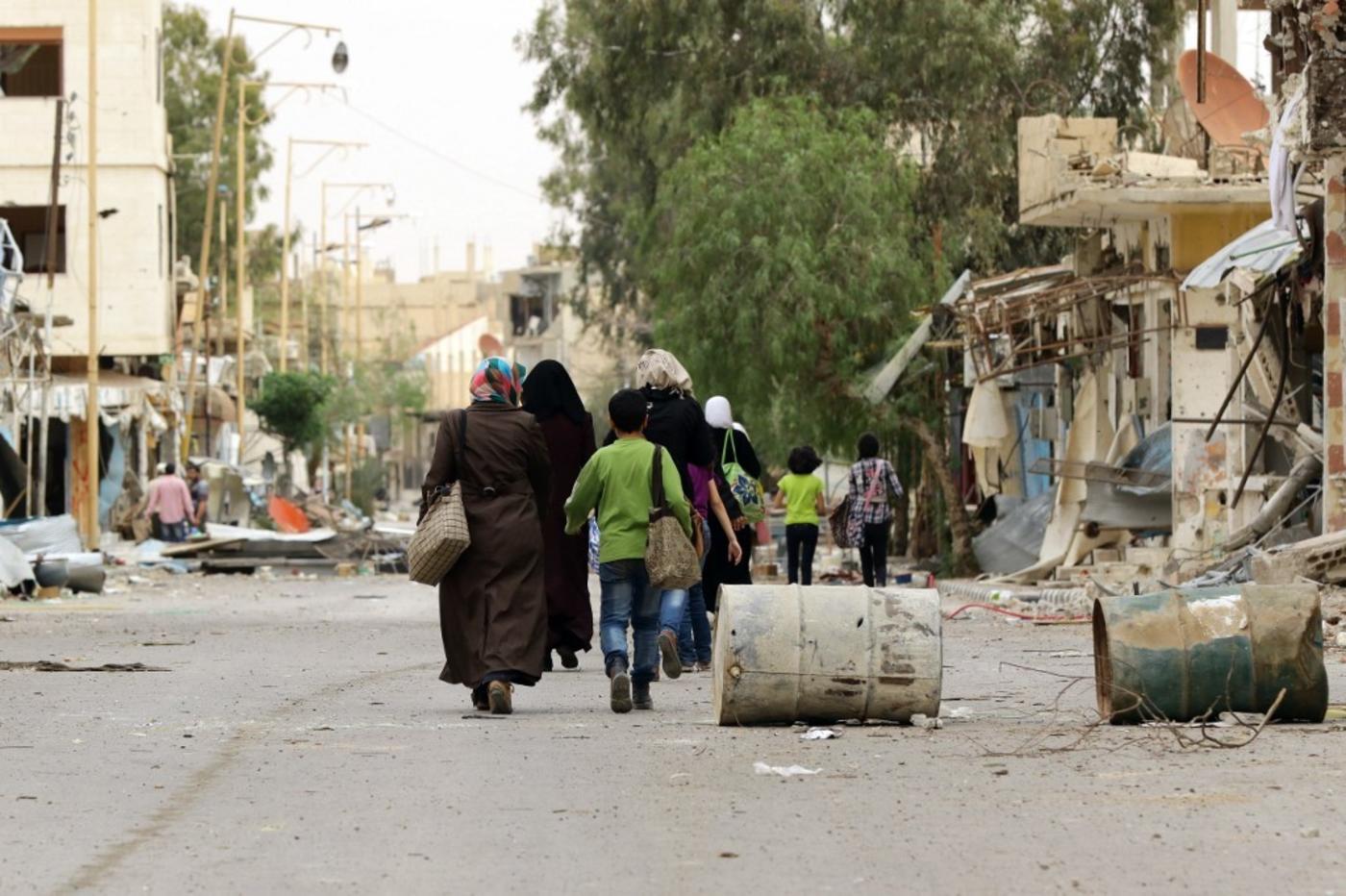 This year’s rains, along with a halt in water extraction from wells and bores in Palmyra during the IS occupation, has ensured the return of the ancient city’s Efqa spring. It’s the source of the ancient site’s oasis but it had been dry for more than 20 years.

Syria’s fields bloom with poppies but are also littered with burnt, twisted metal from destroyed buildings and vehicles.

The debris of war, including plastics and waste material, is being burnt to clear away the rubbish.

“People want to live, so they will live,” Notafji says, reflecting on the need to survive.

Tightened US sanctions have meant there is less fuel for transport and heating, leading to increased burning of plastics and building materials for heating. Intermittent power shortages have increased private diesel generator use and worsened the air quality in Syria’s big cities.

Along Syria’s highways, trucks gather scrap metal. There are also children by the roadside, picking at the debris: many are unable to go to school because their impoverished parents put them to work collecting rubbish to earn an income.

In poor suburbs like Jaramana, in eastern Damascus, a steady stream of children take rubbish from apartments to open ground surrounding a large waste bin. Other youngsters search through the rubbish pile for sellable recyclables like cardboard and aluminium. 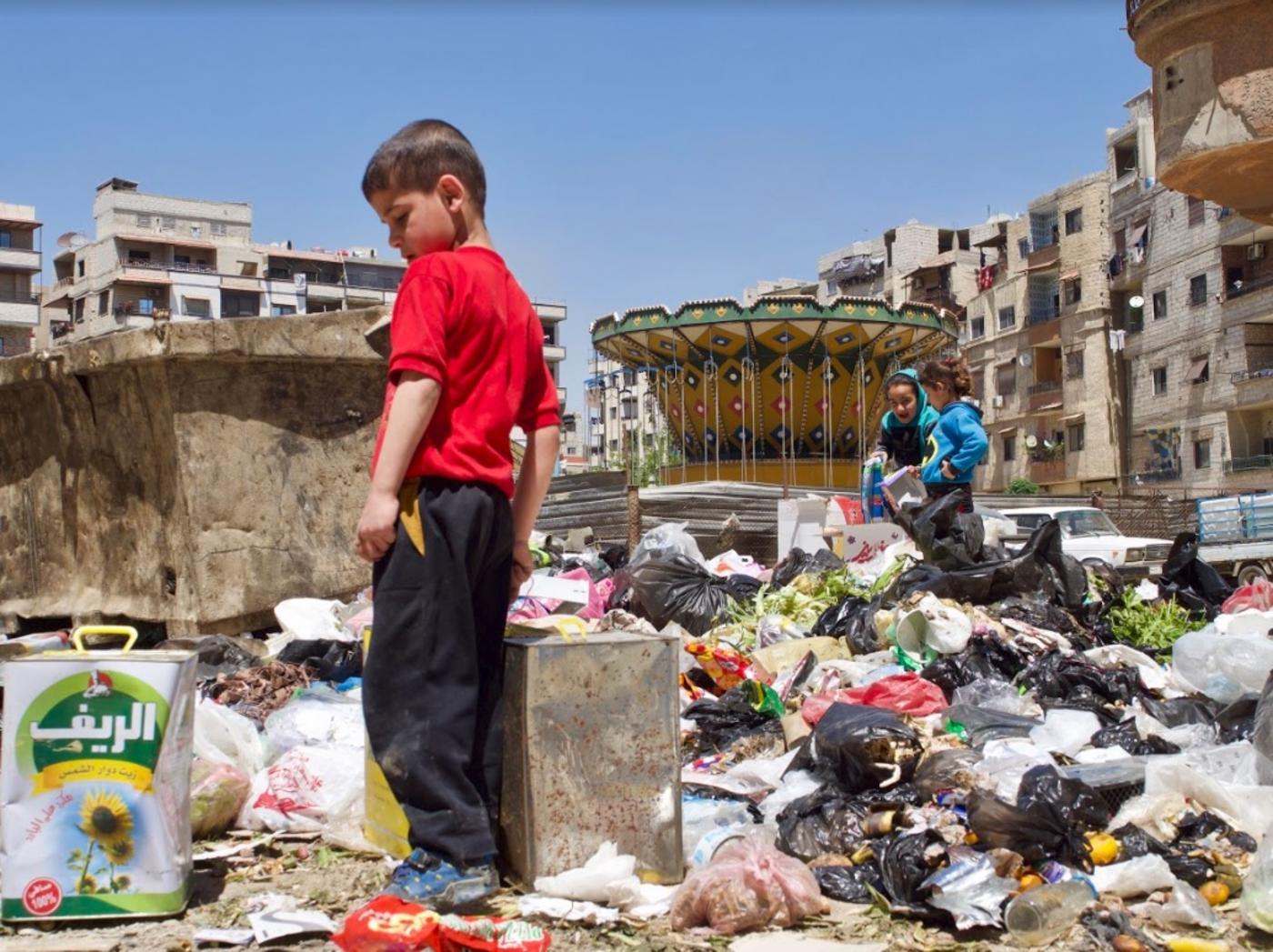 Shoghig Sarkissian, from the Greek Orthodox Church aid agency GOPA-DERD, which operates the Baytouna social centre in Jaramana, says that they have seen a significant wartime rise in children undertaking dangerous tasks, including charcoal production and rubbish collection.

“A 14-year-old girl came to us asking if we could train her in hairdressing,” she says, “she couldn’t stand the fumes of the charcoal, burning wood. Other children often go work with their fathers in construction, carrying very heavy and dangerous things. But many families don’t have a choice.”

SEPS chairman Ghassan Shahin says there is a desperate need for large-scale recycling services given the extent of destruction and breakdown of commercial and municipal waste services.

“We must deal with millions of tonnes of concrete, cement and metal from all the destroyed areas. Not recycling those building materials would mean another environmental crisis added to many crises that the country suffered.”

The hunt for lost knowledge

Despite Syria’s extreme environmental challenges, there is hope in a culture which traditionally has respect and reverence for the land. Damascus’s Botanic Gardens, for example, preserve key plant species used as traditional medicine and perfumes.

Syrians still purchase such remedies from fresh herb and spice shops – known as attaar in Arabic – as often as they patronise pharmacies.

Before retiring from the environment ministry, Notafji was developing natural pesticides and herbicides to help farmers avoid the use of expensive and harmful chemicals. 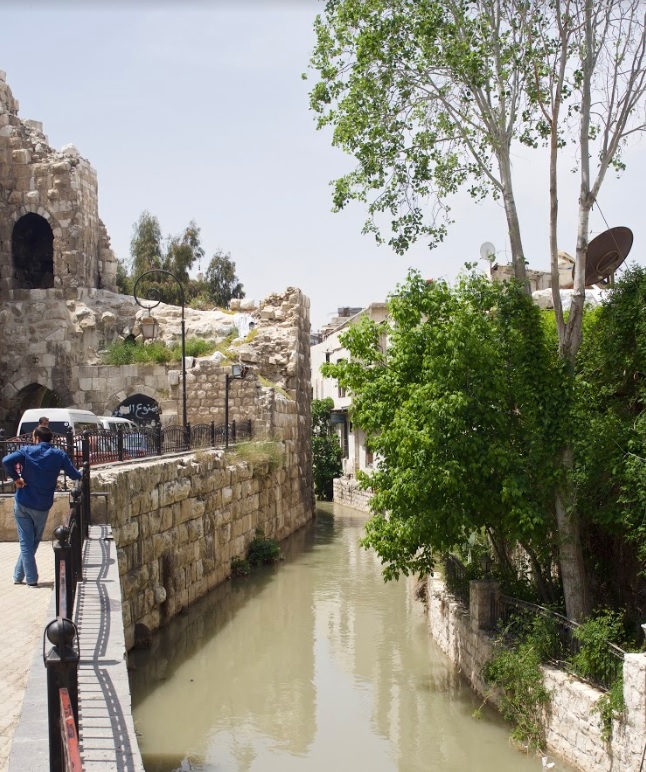 He has continued this work, but progress has now slowed: his extensive home library of botanical books located in the suburb of Dumayr was looted before the building was reduced to rubble. “I lost much of what I knew there and now I have less time and resources,” he says.

In the gardens of the National Museum in Damascus, where ancient stone monuments stand among shady eucalyptus and vines, caretaker Ahmad al-Zara’i demonstrates how he collects orange blossom flowers for use in topical concentrations for aching muscles.

The former woodworker has worked in the gardens for 16 years. He says his knowledge of plants comes from growing up in the once-rich agricultural lands of Ghouta, on Damascus’s eastern outskirts, which has been damaged by fighting and was retaken by the government last year.

“I prefer to use what the trees give me. I don’t need to pay for medicine,” he says.

Sidawi says that the devastation of Ghouta’s agriculture has not only meant the destruction of thousands of trees, jobs and food supplies, but also the loss of knowledge and resources.

“All of Ghouta’s agricultural machinery and technology was looted and we even lost a major seed research centre run by the Ministry of Agriculture,” she says. “Decades of research was destroyed.”

Organisations such as PAX argue that green concerns should be given higher priority as part of the humanitarian response to Syria’s conflict.

In the botanic garden, Notafji agrees and says that a healthy environment can be a point of common ground to help bridge social divisions.

“I like people. I don’t care about where they are from, their religion, or their politics, these things don’t interest me…. I love music and plants,” he says. “If someone who likes music wants to listen together, that’s what we’ll do.

“If he loves flowers, great, let’s sit together. Other than this, I don’t need to get involved in any discussions.”

This article is available in French on Middle East Eye French edition.

Alex Ray is an Australian freelance writer and programme manager, who has lived in Jordan, Syria and Lebanon.