Lena is an Armenian Syrian singer, composer and musician. Described as a Syrian ambassador spreading the jasmine voice of Damascus, she has performed in Germany, England, Sweden, Turkey, Jordan, Lebanon, and Russia, as well as her home country of Syria. 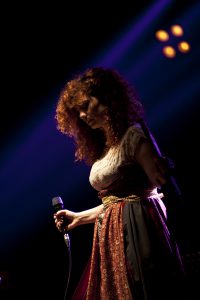 She sings mainly in Arabic and Armenian, but also in Syriac, English, French and Italian.

Lena graduated from Damascus University in 2002 and from the Higher Institute of Music in Damascus as a soprano dramatic singer in 2007.

“I have been utterly won over by the enchanting music of Lena Chamamyan. Hal Asmar Ellon, her first album, has provided the perfect soundtrack for my evening as I have sat on my balcony and watched the dusk sun illuminate the leaves of the gum trees. It is undoubtedly a very different scene from the Syrian landscapes where the music was made.** It is a fitting contrast however, as it is the contrasts in Hal Asmar Ellon that make it great. The songs are a revival of Syrian and Armenian folkloric tunes played with classic and oriental instruments. The use of jazz re-harmonisations and rhythms create a textured soundscape which Chamamyn’s pure vocals effortlessly glide over. While I cannot understand the lyrics as they are not in English, the emotion of the songs is conveyed very clearly through the lamenting vocals. As is written in the CD booklet, ‘music continues to be the global language that is able to comprehend all rituals, backgrounds, and forgotten ideas.’ Chamamyan’s sincere and yearning vocals transport me to a different place; at times melancholy, and at others playful and surprising.

**Author’s note: Since writing this review I have learned that there are actually a number of gum trees in Syria. That simple misconception reinforced for me how much I have to learn about this beautiful country and the value of publications such as this.”