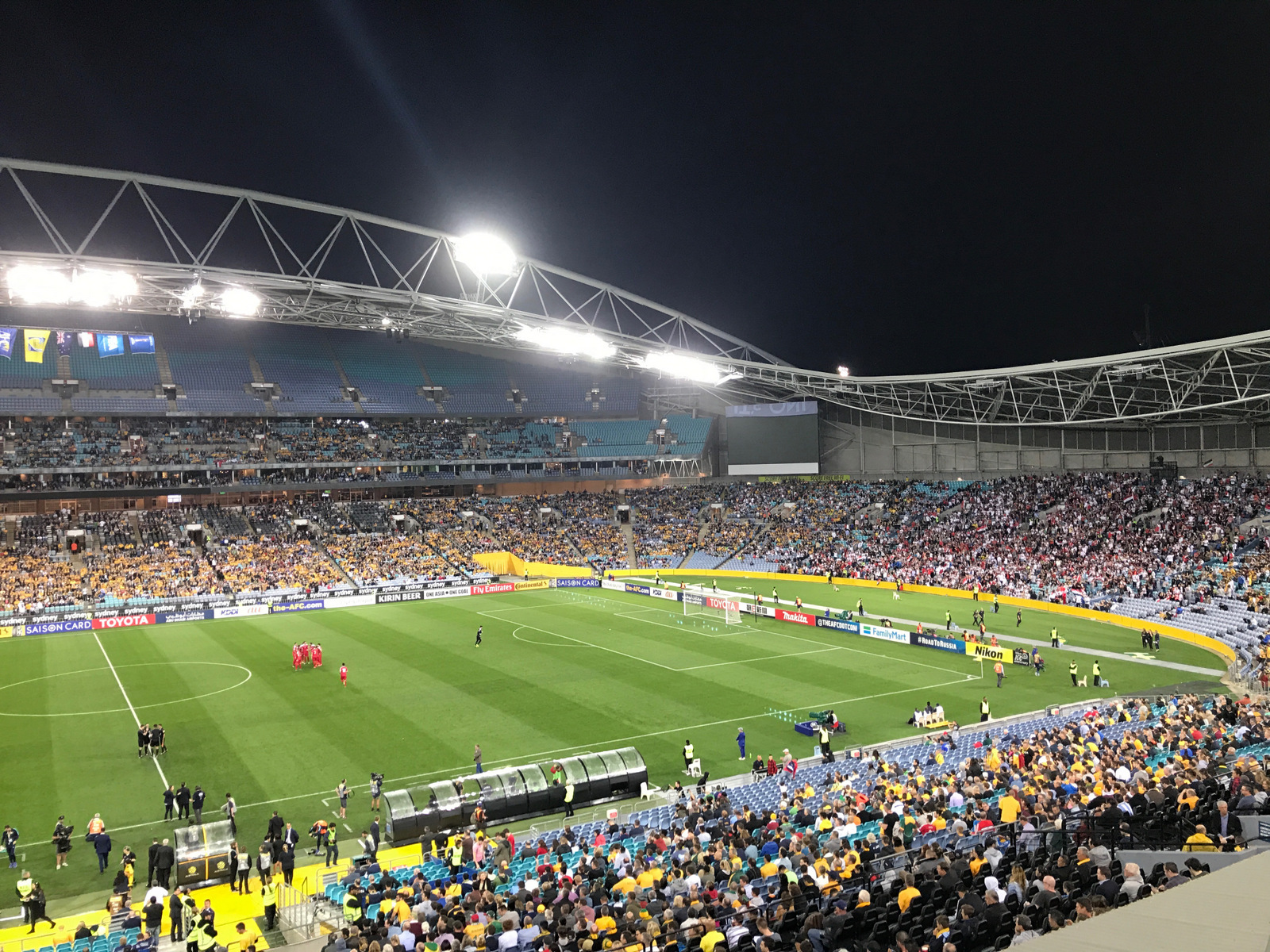 It was a match that had all Syrian football fans in a state of football euphoria. Almost two hours before kick off, the front of Stadium Australia was already filled with Syrian fans that had come to support their team in what was arguably the most important World Cup Qualifying match in the history of their national team.

Syria’s underdog story began on 15th November 2016 when they fought out an impressive 0-0 draw against Iran. Since then the squad had come up with impressive wins against Uzbekistan and Malaysia as well as important draws against South Korea and Oman. Their Cinderella story culminated in a last gasp equalizer by Omar Al Soma to make the score 2-2 against Iran, booking Syria’s spot in a World Cup Qualifier play-off match against Australia.

The Syrian squad had faced their hardships along the way, having been forced to play all their home matches in Malaysia along with a reduced budget that had mostly been spent on maintaining security.

Yet none of that seemed to matter outside the front of Football Stadium Australia. Syrian fans from all over the globe joined together to dance ‘dabke’ style, singing along to Syrian folk music to celebrate the fact that their football squad could be on the cusp of playing in its first FIFA World Cup. The eternal love that Syrians have for football was shown by the different generations of Syrian migrants that had turned out to support their home country.

What was even more touching was the very young Syrian Australians who had come to watch the squad play. A group of girls and boys under the age of 10, enjoying a public celebration of their culture, were covered in a mix of Syrian supporter gear and the green and gold colors of the Socceroos.

Hussein Omay, a 16-year-old Syrian fan, described the importance of the occasion.

“ The result against Iran last week was amazing and you can see how much it means to us to be this close to going to a World Cup. To be honest it’s a dream we are all experiencing,” said Omay.

The Syrians were confident going into the match with the return of their star striker Omar Al Soma and their captain Firas Al-Khatib, both returning to the national team for the first time in five years. The arrival of these players back into the squad had provided a firm statement that Syrians were unified in support of their team.

Suhail Sawa, a 23-year-old Syrian on a UN humanitarian visa in Australia, is a passionate football fan. He described the game as one of the most beautiful stories of world football.

“I’m very proud of my team. We have war in my country and it is still going. The best thing that has happened to Syria in the last 6 years has been the Syrian national team. No matter who you are, whether you support different policies, we are all behind our national team. We have always had this unity and love for the national team.”

When asked about his prediction for the game Sawa had high hopes for his team.

“It will be amazing if we qualify. I think that we are strong enough to win and that Omar Al Soma will score 2 goals”.

Only 6 minutes into the match Suhail’s prediction was looking like it was going to come true after Omar Al Soma broke away from Australia’s defence to fire in a powerful strike past Australia’s goal keeper Matt Ryan. For the next nine minutes the Syrian fans behind the opposite goal celebrated, basking in the possibility that they could finally be going to a World Cup.

But then, Tim Cahill, Australia’s own version of Omar Al Soma, stepped up for the Socceroo’s to equalize with a precision header to the back post after having been gifted the ball from a perfectly weighted cross by Matt Leckie. After this, the game hit a stalemate and it would take until extra time for either team to make a breakthrough. The deadlock was finally broken by no other than Tim Cahill again, who rose to meet Robbie Kruse’s high cross to nod the ball with his head into the back of the net to make the score 2-1.

Syrian hearts were further broken when Omar Al Soma stepped up to take the last free kick of the game. The Syrian striker fired his shot past the wall and Australia’s goalkeeper Matt Ryan only to be stopped by the far post.

As the final whistle blew, Syrian players fell to the ground at the painful thought of their World Cup dream being over. Omar Al Soma who had proved to be the difference for Syria so many times before, left the pitch in tears, receiving a standing ovation from both sets of fans.

For the Syrian fans all that was left was to support their players that had truly given everything to make their World Cup dreams possible.

Syria’s Manager Ayman Hakeem only had praise for his players commenting,
“ I am so proud of my players and what they have achieved so far. We had a lot of injuries and I thought we performed well here in Australia against the Socceroos. I just want to thank the Syrian people and the fans tonight for all the support they gave us.”

Syrian fans can only be thankful and proud of what their team had achieved throughout this year’s qualification. It would seem that the joy their story has provided has transcended way beyond the football pitch. Regardless of whether they will appear at a World Cup anytime soon, the future of the national team looks promising.