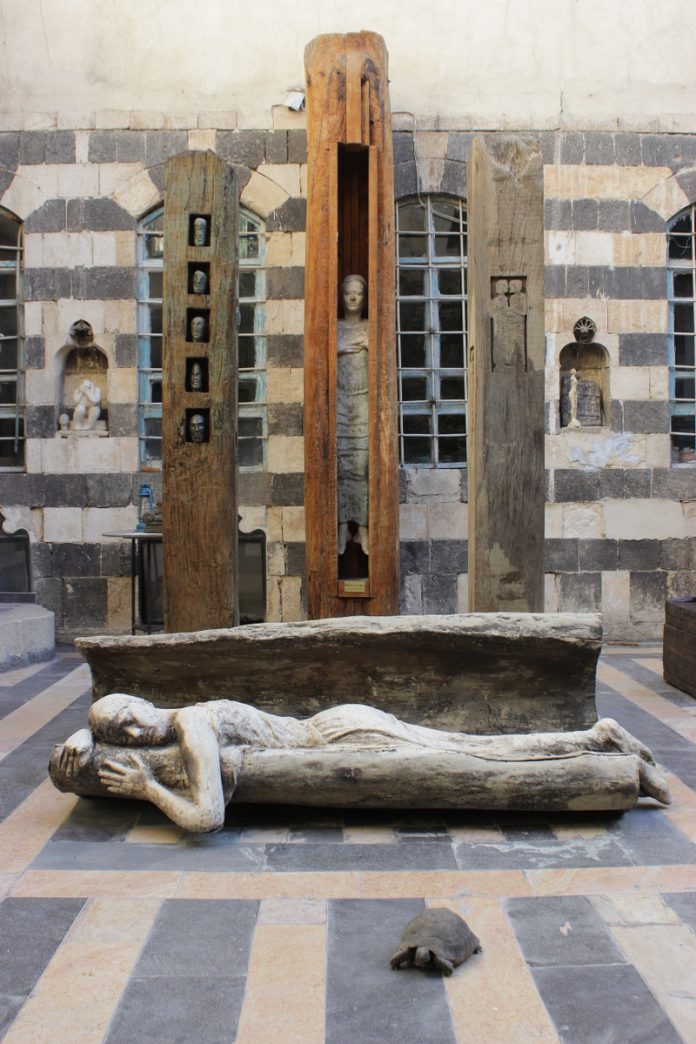 In 2009, Bruce Petty – a political satirist, cartoonist and filmmaker – included Damascus on his list of cities to visit for a documentary film project, a follow-up to his 2007 film Global Haywire, for which Bruce won the AFI Best Documentary Director prize. 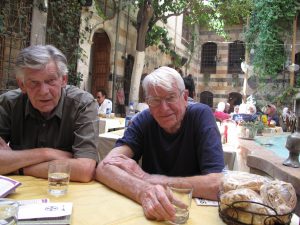 I had met Bruce at the Melbourne Writers Festival the year before and when he later informed me that he was off to Syria with his trusty cameraman/filmmaker, Michel Pearce, I put my hand up to be his trusty ‘producer’.  He accepted.

This led me back to a city that felt like a second home. I had lived in Damascus for two years, so had wandered its souqs, sat in its cafés, listened to the oud being played in old city restaurants, bought a Bedouin rug, heard the call to prayer and church bells ring, and had warmed to the locals. I proudly presented Damascenes to Bruce and Mike.

As well as introducing Bruce to old friends, former colleagues at the Council introduced me to local intellectuals of note, one of them being the sculptor and non-conformist Mustafa Ali.

The theme Bruce chose for his pilot documentary was ‘utopia’. In presenting questions to Mustafa for this magazine, we returned to that theme.

(Unfortunately, Bruce’s film project didn’t receive the funding needed to complete it, and his interview with Mustafa is lost in a drawer or box somewhere.)

Mustafa Ali is hardly the kind of person you expect to see on a Power 100 list. A diminutive, ginger-bearded man with a generous smile and twinkling eyes, Syria’s greatest sculptor is known for his big heart and considerable hospitality, as much as he’s renowned for his bronze sculptures. Arabian Business magazine named him one of the Arab world’s most influential cultural figures — two years running.

The country’s most beloved and most successful artist in Syria and abroad, Mustafa Ali has been a key player in transforming the almost abandoned Jewish Quarter from a dilapidated area devoid of life to a vital and vibrant neighbourhood. The artist has a vision for the whole of the Old City and a plan for how it can be made into a much more habitable place for residents and visitors.

There is a theory that we need a dream or a utopia in our minds for us to act in progressive ways, or in ways that benefit humanity. Would you agree with that?

I still believe in a humanitarian dream, where everybody lives in peace. Mixing my desire with my dream, I made a miniature of an ideal city, where humans live lovingly and in peace. This dream is a necessity for the comfort of the human spirit and for the dissemination of justice and equality.

My “personal” ideal city is all that is left of my big dream. It could be described as “an artistic and intellectual oasis in Damascus”, and my doors are open to all. I couldn’t build my big dream; thus, I created a miniature. 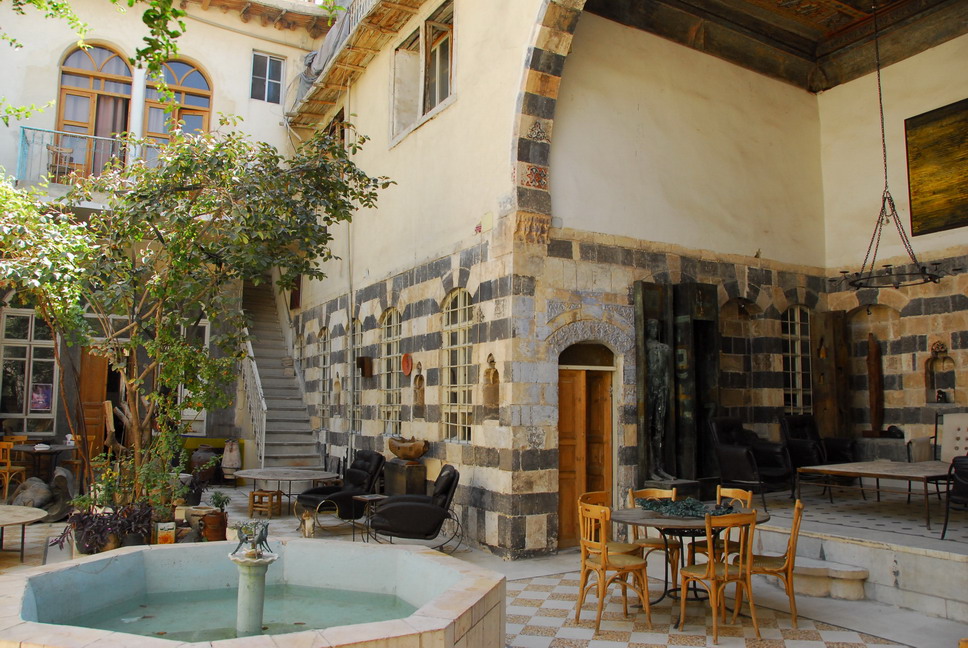 What is the utopia you have for Syria?

Syria is a cradle of civilization and a hub for the creation of humanitarian ideas.  Syria is a county that gives, and a country of noble ideas. Syria is where humanity can dream. Syria now is in dire need to go back to its pure and beautiful thoughts, so people can live in harmony.

What is the utopia you have for the world?

Utopia, the dream: it starts by creating islands and small spaces on earth, for people with humanitarian ways of thinking and with firm convictions. These individuals can present humanity with the possibility of turning this dream into reality. Through resolve and determination, the dream becomes reality. It is like a drop in a large ocean, but it becomes bigger as it merges with others.

Should people commit themselves to the happiness of the wider world, and if so how can they best do that?

Humanity always brings forth people who are intellectuals, prophets and philosophers, holding noble humanitarian values. These values are the basics required for happiness. This is subject to change and development; thus, it will not be stagnant and bureaucratic or subject to laws that restrict freethinking. Human development and progress always need a new way of thinking.

What is your view of a progressive person in the context of both the society you live in and the wider world?

Our world has turned into a harsh and complicated one. Human and moral values are declining. The world needs to look for a new solution for comforting the human soul and for spreading justice and equality. Humanity is in need of reformers and visionaries, so the human spirit can go back to happiness and tranquility. 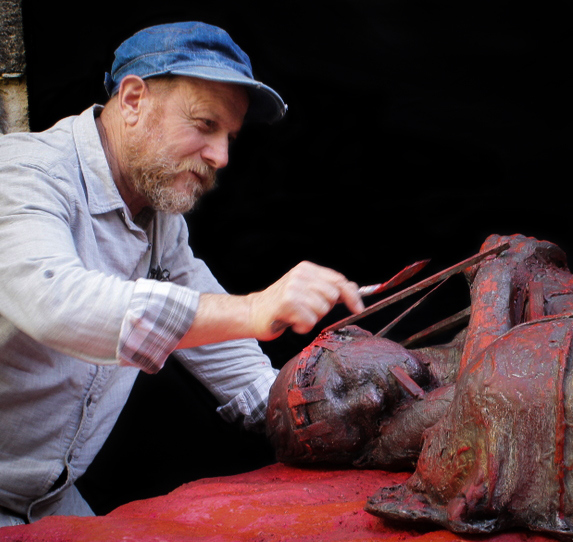 What do you hope to express through your art?

Individual justice, self-respect and personal freedom are essential in the lives of people. Humanity will never collapse as long as there are individuals capable of creating change through art, the intellect and culture.

What I see in art and what I express though art are a mirror reflecting what is happening and what is going to happen. Art is an indicator of the danger that is threatening mankind. Art is also a way of overcoming formidable obstacles. It is a stand, and an opinion. It is a declaration for humankind to build a better dream and overcome history’s harsh stages.

Can you give some information to readers about the art and music scene in Syria over the past 10 years?

The artistic outlook in Syria is experiencing a distinct renaissance in all types of art. When the crisis started in Syria, Syrian art started to receive global attention. Many artistic events reflect what is happening in Syria. Syrian art was affected by the events and presented its experience to the world, thus the whole world could see through art the horrors and terrors suffered by Syrian people. New young artists emerged from the destruction and from the tragedies faced by Syria. These artists are delivering their tragic messages to the world.

What is your philosophy of life?

My philosophy of life is close to chaotic, where fixed ideas become deadlocked, where they are a burden.

Where do you find beauty and love?

I find love and beauty in the works of artists and people of genius. I find them also in the eyes of the people.

Art is a powerful drive for love, beauty and self-discipline.

You studied fine art in both Italy and Syria. What traits do artists in Syria share with non-Syrians artists?

There are common features between my study in Syria and my study in Italy. There were the Phoenicians in the Levant, and the Etruscans in Italy. Both of them are references for my artistic soul. I belong to both families on the artistic level; they are the foundation to my growth as an artist.

Do artists everywhere strive to do something similar, and if so, what is that?

Artists worldwide have a common spirit, a distinct attitude and a purely individual style. I see all artists as being linked in their efforts to create beautiful and noble dreams for humanity.