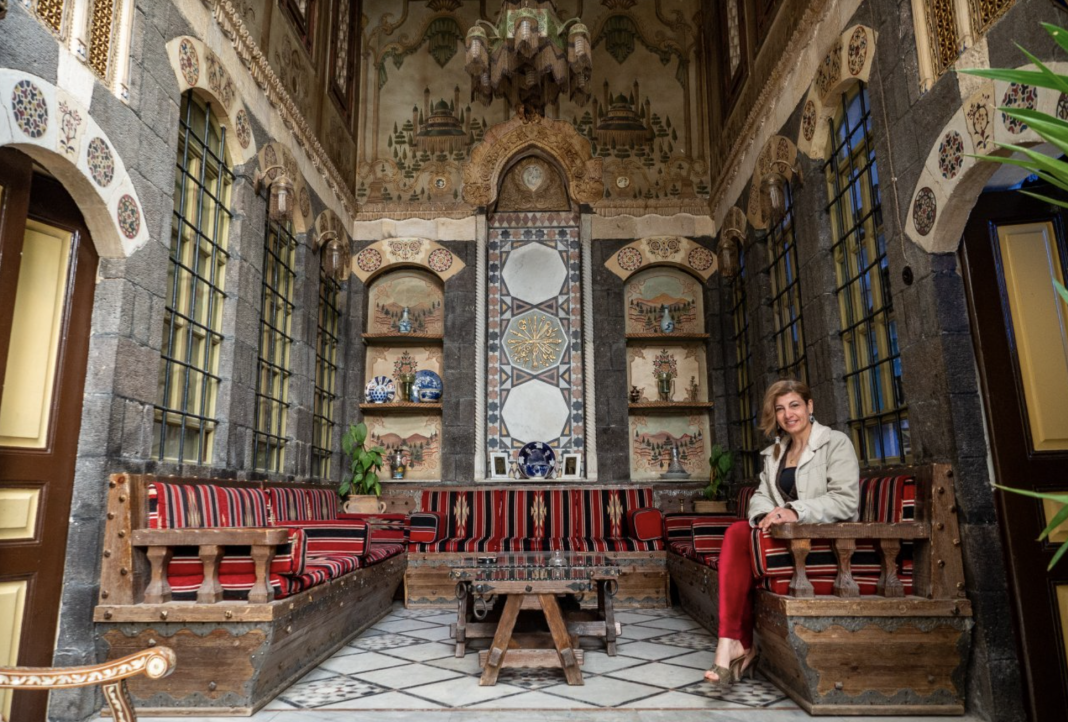 Written by Chris Ray, this article was first published in the print edition of The Saturday Paper on Jan 25, 2020 as “Ode to Damascus“.

It may seem like an unlikely holiday destination, but as peace returns to Syria, the struggling nation hopes tourists will too. By Chris Ray Until a decade ago, the Ottoman-era mansions of the Old City of Damascus were among the Middle East’s finest boutique hotels. Cooled by water fountains and scented by citrus trees and climbing jasmine, their airy courtyards offered a soothing refuge from the raucous streets of the Syrian capital. They were a magnet for visitors during a tourist boom that collapsed when Syria tumbled into chaos and war in 2011.

One of the loveliest was the Talisman Hotel, a restored 18th-century merchant’s house in the former Jewish quarter. Its pre-war guest list included European royalty and Hollywood celebrities, but when I stayed there in the winter of 2015 it housed refugee families displaced by fighting on the city’s periphery. Rooms were cold and dark because electricity was rationed to a few hours each day. Conversations were interrupted by the roar of MiG fighter jets and, less often, the unnerving sharp whistle of incoming rebel mortars.

Recently, I went back to the Talisman down a narrow alley off biblical Straight Street, where the blinded Saint Paul supposedly regained his sight. The refugees were gone, the courtyard was filled with scaffolding and ladders and the manager, Walid Murad, was overseeing renovations. “Damascus has been peaceful for more than a year and our hotel will soon be ready to receive foreign tourists,” he said.

The army of President Bashar al-Assad has retaken most of Syria except for northern zones controlled by discordant jihadist groups, Kurdish fighters and Turkish troops. In major cities such as Damascus, Homs and Aleppo, concrete blast walls still protect key government buildings but there are fewer military checkpoints and bag searches.

Taking advantage of the relative calm, Western tourists are again visiting Syria despite advice from their governments – including the Australian government – not to travel anywhere in the country. Undeterred by the warnings, two major European travel agencies – Europamundo of Spain and France’s Clio – ran soldout tours to Syria last year, with Clio advertising guaranteed departures well into 2020.

British company Lupine Travel plans to run four trips this year. “We’ve filled two trips already just through word of mouth and we expect the other two to fill up as soon as we send out to our mailing list,” said director Dylan Harris. “If any of the areas we plan to visit became unsafe, then we would alter the routing of the trip. If the general situation in the country declined again, then we would cancel the tour and give full refunds.”

Syrian operator Luxor Travel got its first foreign clients in eight years after opening a stand at the FITUR international tourism fair in Madrid last January. Luxor’s itineraries cover a 500-kilometre route from the splendid 2nd-century Roman theatre at Bosra in the far south to imposing mediaeval castles in the north-western mountains of Latakia.

“Everywhere we go is safe and we expect other areas to open up to tourism as the situation gradually improves,” said manager Wassim Daaboul. He collects customers from Beirut airport, about three hours’ drive from Damascus, and shepherds them across the Syrian border, where a giant billboard reads “Welcome to victorious Syria”. The women who beg with outstretched arms at the immigration arrival hall, however, signify the cost of military success.

More than five million Syrians have fled abroad and most of the 18 million who stayed behind live an existence pared to the bone. The United Nations estimates 11.7 million need humanitarian assistance. A government employee in Damascus told me: “I lived with war every day for seven years and got used to it. I can’t get used to not being able to feed my family.”

The tourist experience can be confronting, because of what still confronts Syria’s population. Six million people inside the country have lost a permanent home, 1.75 million children have no school to attend and one in three children misses out on lifesaving vaccines. Shortages of medicines, food, fuel and other essentials are partly due to Western economic sanctions, which have “contributed to the suffering of the Syrian people”, a UN study found in September 2018.

In most of Damascus, electricity is rationed because United States and European Union sanctions effectively block imports of fuel needed for power plants. Despite this, at least a dozen Old City hotels are under renovation in anticipation of a tourist influx. At the Sah al-Naum hotel, a converted 18th-century mansion, manager Nour Neema said power cuts would not stop the hotel reopening because it has installed batteries with enough power to dimly illuminate its beautifully panelled rooms.

Visitors have to get used to an absence of global banking connections. Sanctions are the reason your ATM card and credit card won’t work in Syria and Australian banks won’t transfer money to a Syrian account. Package tour providers such as Luxor Travel get around the restrictions by taking deposits through a foreign bank account. Customers must bring US dollars or euros to cover the balance and all costs inside Syria.

Under revised Syrian government regulations, tourists are required to book a trip with a licensed Syrian travel agent in order to get a visa. An independent traveller who did manage to obtain a tourist visa would have to negotiate many highway checkpoints and show a permit to access sites such as the desert monuments of Palmyra. Checkpoint guards rarely speak English and don’t like cameras. “We ask all our guests, please do not take photographs of military areas and checkpoints,” Daaboul said.

Despite wartime austerity, Damascus retains its allure. Unlike most Middle Eastern capitals, its ancient heart remains a residential district rather than a museum preserved for tourists. The Old City walls embrace a densely built maze of historic houses, mosques and churches, bathhouses and artisans’ workshops covering almost two square kilometres. Children play in narrow lanes overlooked by balconies and strung with banners commemorating local sons lost to the war. The souks (covered markets) are packed with shoppers.

In a short section of the grand Souk al-Hamidiyah are pastries and spices, stringed instruments, lingerie and prayer gowns, shoes, silk brocades and cartloads of almonds. Tiny alcoves display shisha pipes, pottery and marquetry, perfume and flowers, and children’s toys. Mundane items such as kitchenware and toiletries vie for attention with sweets arranged like bright jewels in inlaid lacquer boxes and vendors who pour sugared tamarind juice from elaborate shoulder-borne jugs.

A cultural crossroads for millennia, Damascus exemplifies Syria’s religious pluralism and diversity. The Muslim call to prayer blends with the ringing of church bells and a stall offers Orthodox Christian icons beneath the walls of the magnificent 8th-century Umayyad Mosque. Like all Syrian places of worship, it is open to everyone and English-speaking attendants will help you to observe protocol.

Tourist itineraries incorporate cultural monuments dating from the Sumerians to the Ottomans. Despite well-publicised damage to World Heritage sites such as Palmyra and the Old City of Aleppo, “Syria still presents an unrivalled range of treasures,” writes Ross Burns, a former Australian ambassador to Syria and author of several books on its archaeology.

For the moment, most sites are near-deserted and visitors will feel they are getting a private viewing of some of the world’s historical wonders.

The Australian government sanctioned Syria in 2011 in response to what it called the “deeply disturbing and unacceptable use by the Syrian regime of violence against its people”.

Some may choose not to travel to Syria on ethical grounds. However, tourism accounted for as much as 14 per cent of the pre-war economy and the livelihood of hundreds of thousands of Syrians depends on its revival.

Those who opt to see the country firsthand will witness confronting scenes of urban destruction and poverty. They will also get a warm welcome from a resilient and resourceful people. In the souks of Damascus, shopkeepers call out, “Welcome to Syria, thank you for coming”, but there is no hard sell. As a Syrian friend put it, “They see you as a good sign that life is getting back to normal.”

Chris Ray is a freelance journalist and writer who covers social and political issues for publications in Australia and abroad.

He has worked as a news reporter, publications editor  and communications manager in Australia and a news agency copy editor in Vietnam.